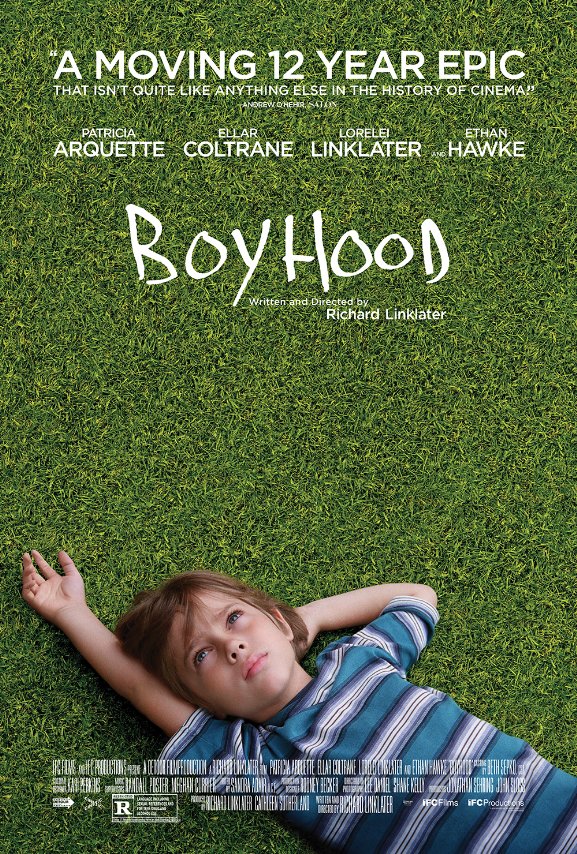 Written and Directed by: Richard Linklater

Richard Linklater’s “Boyhood” is a twelve year story of a boy, Mason, whose life we follow from age five to age eighteen. During these long years, he sees his Mom’s separation, divorce, moves from one city to another, her breakups, scandals, and the cruelty of her boyfriend. Despite all these difficulties Mason and his family have had during these twelve years, in the end, Mason understands that boyhood is still the happiest time of his life.

It took  twelve long years for Richard Linklater to make his most critically acclaimed film, “Boyhood”, which is slowly becoming the Year’s best film, so far. I would go as far to say  that “Boyhood” has a very good chance of winning Best Film of the Year. I will be honest with you – ‘Boyhood’ is a cinematic masterpiece; simple, straightforward, and moving. Richard Linklater`s heroes are not wealthy, don`t drive fancy cars, cannot afford Five star restaurants, but they are not poor either. Still, Linklater`s characters’ have  the heart, determination, and strength to not to give up no matter what, and to keep doing what they do best: loving each other, caring about each other, and learning, which is what will allow them to go far- once they pass difficult stage.

The film begins by introducing Mason Jr. (Ellar Coltrane), who is five years old; the son of Olivia (wonderfully well played by Patricia Arquette), a struggling working-class single mother who does her best to raise her two children. Mason`s father (Ethan Hawke) has separated from his mother, and has moved to a different city. However, Mason Sr. still sees his kids, and makes sure that they will not become like him when they grow up. Olivia works at a College, and makes enough money to support her children, while she moves from one house to another, from one city to another, all because of unsuccessful relationships with men. Despite all her hardships, Olivia`s strong character, and endless love for her children does not break her spirit, and she remains strong throughout these twelve years to raise, educate and support her kids until they go to the College.

What fascinates me most about “Boyhood” is the way it was made.  It is really unusual to see the same character, either a little kid or a grown up, who changes his look throughout the film, as the years goes by. After one hour of watching the film, you disappear somewhere in between, and fall into its miraculous timeline and live the years and lives along with the people you see on the screen. You clearly see who they were before, and who they became after twelve years, and this will surely impress you. Linklater shows us how life can be spent within a twelve year time span.

No one wants to spend almost three hours in a movie theater watching a film that becomes boring midway through. This is what I worried about when I saw that the length of ¨Boyhood¨ is close to three hours. But after just three minutes of watching “Boyhood” I realized that this is one of those films where you can spend six hours watching and still not want it to end. “Boyhood” is  one of those films that will take you on a journey, along with the characters, for  twelve unforgettable years- full of ups and downs, but still wonderful years.

Richard Linklater’s “Boyhood” will remind you of your childhood, your years spent with your  parents, and forgotten friends from whom you have drifted apart while moving from one city to another (if there were any).

But Richard Linklater’s film is not only about Mason`s boyhood, it is also about parenthood, which is the most important thing about this film. Because whoever Mason becomes would not be possible if not for the strong spirit of his Mother, whose attitude and limitless desire to help her children, and educate them, is the main subject of this film. And surely, Olivia (Patricia Arquette), a single mother, truly deserves a standing ovation.