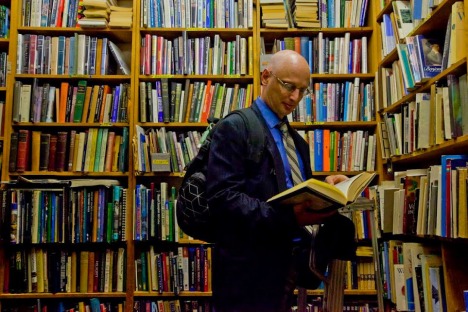 Toronto Filmmaker Crowdsources Support for Feature about Love and Poetry

An award-winning Italian-Canadian director Alberto Diamante and producer Galen Brown launched a rewards crowdfunding campaign on Indiegog­­­­­o in support of their new film “The Bookstore”. The 30-day campaign aims to raise $100,000 to fund the initial production of the film, which is slated to being shooting in January 2016. “The Bookstore” Indiegogo campaign will run until 17 November, 2015. Individuals can contribute at http://igg.me/at/thebookstore

“The Bookstore” tells the story of George D’Amico, a cranky shopkeeper, who, through helping a teenager win over a girl’s heart, finds inspiration to resolve his own professional and romantic troubles. Starring writer and director Alberto Diamante, “The Bookstore” takes a heartwarming, yet comical look at the relationship between love and literature.

“It’s the kind of film that makes you feel smarter,” says Mr. Diamante. “A film that respects audiences’ intelligence by sharing a passion for literature, creativity and poetry. After you see this film, you will appreciate literature more. Oh, and I almost forgot…. it’s hilarious!”

“The Bookstore” is Mr. Diamante’s third feature film. His first film, “Ulysses” (2006), won “Best Picture” from the Young People’s Jury at the Bergamo Film Festival, where it was also the overall runner up. His follow-up feature, “Love…and other reasons to panic” (2007) is currently available across various platforms including iTunes, Google Play, and Amazon.com. Mr.Diamante’s screenplay “Skin” is currently in pre-production.

For more information about the film, please visit http://www.thebookstoremovie.com/.

Go to Indiegogo page to Support “The Bookstore”