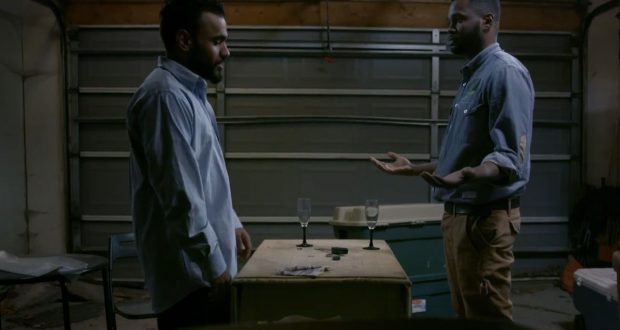 I have never forced myself to like or at least sit through till the end of any movie with such impatience the way it happened with Natty Zavitz’s Edging. Don’t get me wrong, it was that painful to watch because, for some reason, I felt myself too old to understand a thing the characters were talking about… it’s sense, point, and why it had to happen in the first place.

Jordan just bought a house. He throws a housewarming party and invites some old friends and colleagues. While he is in his garage and missing the entire fun upstairs, Jordan (Shomari Downer) has an insightful chat with Nick (Andy McQueen), who helps him out to fix the garage door. As they go through their past, they recall moments or people that broke their hearts and the reasons they still can’t recover.

As we move from one interior to another, it feels dull having this movie watched at all. Jordan is a modest man who does not seem to be enjoying the party he planned. His colleagues (Christopher and Crossland) are busy doing drugs in the washroom, Jordan continues having the talk of his life with friends Racheal and Bree, a woman who is not indifferent to him.

As the story unfolds, and there is not much to talk about, Edging tries hard to keep the viewer engaged through unnecessary scenes. While I had no issues with the acting, it was the storyline that made no sense to me at all. While the idea itself, of course, was excellent, it did not play out well. I am afraid if you’re a demanding viewer who wants to care about the characters you see on the screen, you should probably pass this one on, and watch something else instead. Again, I am sure, there are many people who will find some value in the Natty Zavitz movie, but it won’t be as many as you could think of. And how could it?