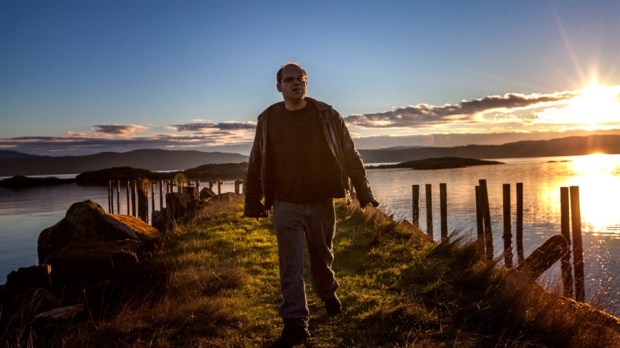 When I first watched Alan Zweig’s HURT, I could not believe my eyes. Steve Fonyo, a man who was once nation’s pride, a cancer survivor, having all these recognitions had put himself into a position where he could batrely find a roof to sleep under. Alcohol, constant fights, arrests, even drugs… A man who once met fame became an embarrassment of the society… But all that was until Alan Zweig goes back to make his follow-up film, where the Steve Fonyo you’re about to meet is no longer the one you would feel sorry for…

After sometime, when Steve starts to slowly recover from a serious injury, he allows filmmaker Alan Zweig to start filming him, hoping that he might finally find redemption in life to build it or fix it up in any way possible. Putting himself into rehab, Steve reveals the reasons he must finally grow up. And it is a very interesting look, as you will notice the difference between two Steves you have met in the award winning HURT and now in HOPE.

The credit must go to Michelle, Steve’s girlfriend who kindly supports him on his way for a better life, or at least to leave a troubled one behind. She is fearless and ready for his fast-changing mood. He might be jealous and a bit controlling, but all these in the right level make Michelle feel loved, cared and exceptional. The film itself, I should say, is exceptional in its own way: it’s very easy to watch, is engaging, and Steve is much more hopeful and interesting than he was before.

Do not get me wrong here, if you have seen HURT you will agree to a certain degree as Steve never appeared as a likable character. He would complain all the time and blame everyone for his troubles but himself. But since the last movie, it’s amazing how much improvement was made by him. He slowly becomes the Steve Fonyo people knew back then. Yes, he might have had and still has some issues, but what this film or even the story of Steve Fonyo proves that it’s never too late to change. It is fine to make mistakes. But it is never fine to not learn from them. Thanks to Alan Zweig, who acted not only as a filmmaker, but as a kind human being, has done something each and everyone must do once in their life – to do good.