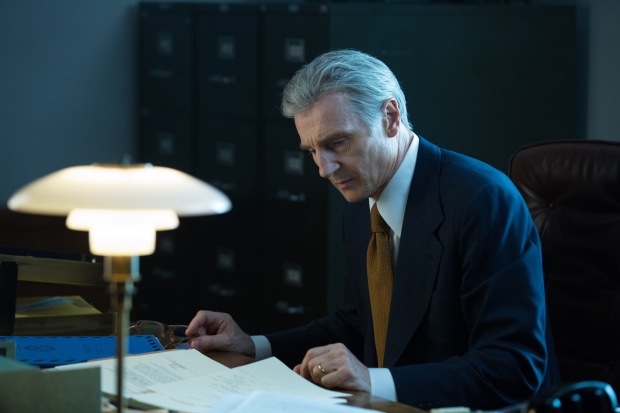 How many actors can you imagine who could portray a man who brought the White House down? Before even seeing the film and brief trailer, it was obvious that Liam Neeson was perfect man to portray Mark Felt, or Deep Throat. As the movie opens this Friday, it’s good to tell a bit about it where the entire drama occurs not only inside of the White House, but at Felt’s house as well, where he had two different storms to handle.

As for “Mark Felt: The Man Who Brought Down the White House“ and Liam Neeson, as soon as you see the film, and I hope you will, the two men have similarities that will be visible to the naked eye.

During the Toronto International Film Festival, I had the great pleasure to sit down with the lead actor, the star of Mark Felt, Liam Neeson, who gladly divided his time fairly between all the journalists he had around to answer crucial questions of why and how Mr. Neeson came to make this film with investigative journalist, painter, writer and director – Peter Landesman.

MOVIEMOVESME: Could you talk about the reasons to portray another hero, but this time a real life one, Mark Felt, a man who brought the White House down?

Liam Neeson: I look at it as a protest just like Peter Landesman. I didn’t know who Peter was. I read some of his investigative journalism pieces over the years. Certainly he had written on the Balkan crisis, I remember. And then he showed me his film “Concussion”. And I know nothing of American football. I’d sooner watch paint dry on the wall rather than watching American football. Seriously it’s just not my thing. So I was fascinated by that film and then I thought for a journalist and this “Concussion” was only his second film. I though he’s told the story very well as a director. And then I met with him and talked about it. I knew very little about the broad outline of what Watergate was, because I was brought up in Ireland. So we were going through our own troubles at the time Watergate was very little. Anyway, some push came to shove for me.

MOVIEMOVESME: How would you describe this character? Do you like him? Do you admire him?

Liam Neeson: I admire him. I don’t think he was initially motivated by an act of heroism. I think he was crushed that he didn’t get the Hoover job when he died. He was a committed FBI guy 30 years. He and Hoover were like that professionally. Then the White House administration brought in Patrick Gray who was a submarine commander. Nothing to do with the FBI. So I think Felt and his co-workers felt hurt and insulted by that.

MOVIEMOVESME: Is that what you tried to capture first in Felt? Because it did leave an impression that he was someone who was hurt in the beginning, but later on he took all of his actions seriously?

Liam Neeson: Well, I don’t know if I did capture. I mean, you know Peter wrote the script. If he had 10 other writers writing about Watergate and Mark Felt, they would write different versions of it. I’m sure this was Peter’s version. I think he tried to cover as many bases as he could. Certainly with Mark Felt’s personal life – he showed a lot more stuff with Diane Lane and myself that isn’t unfortunately in that movie. You know it just got too cluttered with the personal life of what was happening Watergate wise. But I do know, I only learned this recently that Bob Woodward, the reporter was a young reporter that he really only met six seven times. Woodward knew nothing of Felt’s personal life. He knew nothing about his daughter running away, having a baby. Mark Felt trying to find her through very dubious means Woodward knew absolutely nothing about. Absolutely not.

MOVIEMOVSME: What do you think this movie would mean for American people nowadays?

Liam Neeson: Obviously at the time we didn’t know that Donald Trump was going to be elected. But certainly, when Watergate was over and done with when Gerald Ford pardoned Richard Nixon on the field. I kind of agree he had to. You know America had had enough. And if Nixon had been indicted it would have meant two or three more years of appearing in court. The American people sent Watergate. They can. So I think he did the right thing by pardoning him anyway, but saying Watergate complete finished I mean it was staggering and its impact for what. The idea of democracy what was at stake and having the freedom of the press you know these two neophyte reporters just chipping away at stuff might crazy. One of the actors says the CIA says you know see the FBI and the FBI CIA and the CIA. It doesn’t matter who the president is, you know. Some people really not want them.

MOVIEMOVESME: What kind of approach you had to portray Mark Felt?

Liam Neeson: Well, there’s that on to researching this stuff. I’m still seeing on YouTube you know what like the other night I did follow those four movies ago. For me I’m still shooting something at this moment. So I really had to do my research all over again. I was amazed at stuff like I punched in a book two weeks ago “Truth and Lies Watergate” and a program came up to CNN. Very very good program. And then along the side that gives you might also like these lectures given by these guys, not just Woodward and Bernstein, but this other guy Max Holland, who wrote a book called “Leak the real reason Mark Felt betrayed the FBI” out of the other and that led on to the other stuff. So it’s like this amazing stuff to research. But at the end of the day, I have to tell the Peters script as an actor. What I didn’t like about the guy was, I mean, as a performer, I’m usually fairly emotive. Mark Felt was almost unreadable. Professionally he had just a screen over himself. But when he was at home he adored his daughter he adored his wife that had to be a taxing relationship for her. It comes out a little bit and said we had to move on 15-16 times as he was stationed all over the country and I’m trying to bring up a family. So we try to balance that with the story, and you know, basically, guys walking down corridors, sitting behind desks and showing nothing but telling facts and figures hinting at this. That’s all the movie is about.

MOVIEMOVESME: The way you deliver the line is very unique. I wonder how do you do that so convincingly?

Liam Neeson: Look, James Cagney famously said when he was asked by someone to do a scene, “You walk in the room, plant your feet, look me in the eye, and tell the truth.” That’s all he said. I can do this but I really try to do that. I try to hit my marks on whatever I have to say to try to mean it. So the audience thinks, well he’s speaking the truth, he’s not speaking the lines that were written and that’s just all I try to do.

Liam Neeson: Yes, there’s 30. There’s main research all that stuff but it has to, at the end of the day, look all like this were definitely. At the end of the day, the words I remember, when I did a Woody Allen film “Husbands and Wives” many years ago. And he said to me something I’ve never forgotten. Because he’s famous for giving actors the scenes only, and for some reason he sent me the whole script and I was in Egypt of all places, shooting the film with Andie MacDowell. And I caught SFX FedEx script and it was the whole script I got. So he read this thing and it was quite a beautiful script. Knowing writers, they will think we’ll do it. Should it just be an endless stream of words or should they make them into sentences and stuff like that, anyway. So my first day working with Woody on this film with Mia Farrow. He said, “if the words don’t fit in your mouth just change them.” Maybe he meant it because I was playing Irish. My New York Jewish words aren’t quite Irish enough, maybe that’s what he meant, or not but I learned every word, including his commas and semi-colons as much I could. I’m trying to make them real.

Liam Neeson: This is why I adore writers. I adore the writing process and I am very jealous of it. Because I’m not a writer. I never have been. It’s just to make what they have written come alive. And maybe because a couple of little surprises and the writer didn’t know was in the dialogue or something.