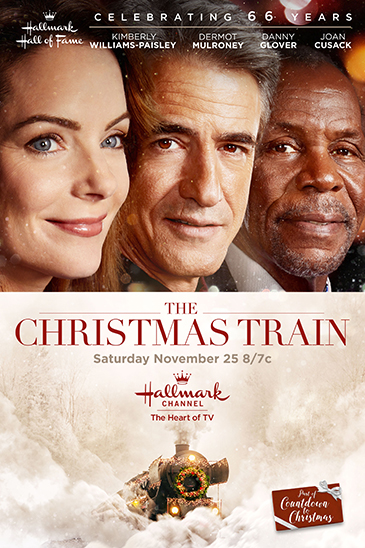 What can be better than Christmas movies, the festive spirit all around and the goodness it brings to everyone. In the holiday season, we all love enjoying heart-warming stories through small or big screens. As to TV movies, there are several distinguishing facts I’d like to underline. Firstly, they are mostly family-oriented. Secondly, they most probably won’t have the cheesy scenes made to sell the film to the audience with special requirements. And finally, nobody will get disappointment after watching a film like “The Christmas Train”. The creators of the film know exactly what you and many others expect, and they deliver it. Thus, trust me, all you need to do is not to miss the ride. The rest is taken care of.

The film follows Tom Langdon (Dermot Mulroney), a journalist who has decided to take the train from Washington, D.C. to Los Angeles four days before Christmas to honor his late father and to find an inspiration for a story that takes place on a train. As he gets on the train, he begins to study the passengers. Among them, he meets the famous filmmaker Max Powers (Danny Glover) who is traveling with his screenwriter Eleanor Carter (Kimberly Williams). As it turns out, tom has once been in love with Eleanor. And apparently, still is.

There is a magical atmosphere in the train. Everything seems to happen for a reason. Coincidentally, Max Powers wants to make a film about a train trip, and this is why he has invited Eleanor to experience the ride that may inspire her to write a profound story. Things become a bit drastic when she meets Tom and finds out that he pursues the same goal. However, their unfinished love-story finds its way to interfere with the reality they so overwhelmingly try to control. The protagonists also make new acquaintances in the train. There is a runaway young couple who plan to tie the knot on the train; a lonely woman named Agnes; Higgins – an old and charming man who misses his old work on the train and many others that will contribute to the four days’ ride that will work out just fine for everyone.

It is Christmas time, after all, and everyone deserves to have a little piece of happiness to enjoy for the rest of their lives. This is why watching films like “The Christmas Train” fulfill any expectation and brings so much joy to every viewer. Some might say, the film has some goofy scenes and the storyline is not very believable. The thing is, certain films do not expect you to think too hard on them, they do not offer any puzzles for you to solve, or look for something to criticize. Yet, director Ron Oliver’s film is like a fireplace that helps us to get closer, feel warm and cozy. So, if you are missing a fireplace at your home, you might choose this film to watch, as the good feeling is guaranteed.