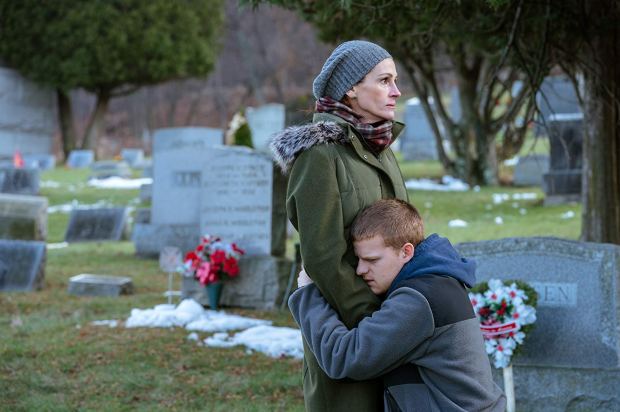 Why spend money making movies about bad guys or girls when we can make films about their drug addiction, dysfunctional relationship with their parents, struggles they go through or whether they make it in the end or not. Written and directed by Peter Hedges, “Ben is Back” is a moving family drama about one single day where the mother will have to ensure her son that comes back home on Christmas Eve will make it through the night safe and sound.

Ben had been admitted to a rehab facility due to his drug addiction. We learn that it was his physician when Ben was little, who prescribed him pain killers so strong that it was enough to turn him into an addict. After being found by his mother upside down on the stairs with a needle in his arm and a dog that tried to keep him awake, Ben was sent for rehab. But he’s back home on Christmas Eve even though his sponsor urged him not to.

His siblings also realize the trouble he may bring with himself, and even Neal, his mother’s boyfriend, is extremely concerned. But it’s Holly, who after a short discussion with Neal, decides to keep Ben for one night but promises to be present everywhere with him to ensure he doesn’t use drugs secretly. But as the story unfolds and Ben suddenly remembers all the sad things that’s happened to him in the same house, the temptation to use drugs begin, but luckily, his mother is always by his side to protect him from himself. But will she be able to manage such a difficult task lies in the premise of the movie.

“In conclusion, “Ben is Back” brilliantly captures the bond between a mother and son, but also the bond between drugs and its user. Indeed, it’s a sad story to watch and not uplifting at all. But it shows how important it is to support a loved one with drug addiction even if that support means doing something that may not be good, let’s say for Ben, but if that’s the only way to keep him alive, to let it be. As for the performances, Julia Roberts delivers a powerhouse performance while Lucas Hedges captures the dilemma – to use or not to use. Live or die. Exceed the expectations or disappoint. Yes, Ben was back home, but was it for good or bad is something I truly hope you learn for yourself.