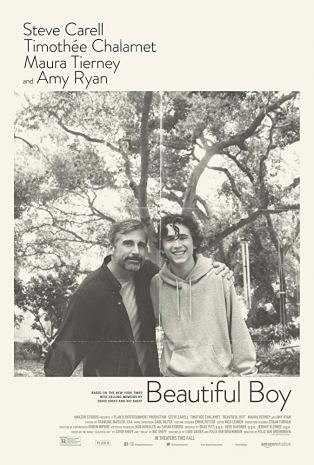 “Beautiful Boy” was the fourth film I was lucky enough to see during the Toronto International Film Festival that tackles drug addiction. After the screening my eyes became too heavy to keep them open due to the non-stop tears coming down throughout the movie. I had a brief discussion with an industry person who had an interesting insight of what is really going on in our society and why some people will look at “Beautiful Boy” as another white man’s story from a very rich family who has a drug addiction. This individual specifically told me, “I liked the film. It was well performed. But it had a big gap in it.” When I asked what it was, his answer quite shocked me but did not surprise at all, “It was missing a sex scene of Nick having with women in order to get money for drugs.”

“Beautiful Boy” directed by Felix Van Groeningen is based on a heartbreaking pair of memoirs by father and son duo David and Nic Sheff about how Nic would relapse during his recovery, how he would use all sorts of drugs and get heavily addicted to crystal meth. As the young man suffers severely from drug addiction, his father David does the impossible to be by his beautiful son, help him to recover, study and analyze the addiction and beat it from within. But during the process, it will be extremely difficult as Nick himself is in complete denial of the issues he is having and continues his self-destruction journey that usually leads toward one end.

Going back to what I said earlier, we must understand what has been captured in “Beautiful Boy” is not about wealth, being white or black, rich or poor, Asian or American, whether you are from this planet or from somewhere else. Drug addiction, same as depression, cancer, Alzheimer’s disease, Parkinson or Autism has no nationality or belief. It’s like a poisoned snake that finds its target and grabs hold of it. The same target is random, so it does not matter where that target lives. If we, after watching “Beautiful Boy”, still talk about some strange ideology, we have a big issue. The issue is that we can’t fix it until we admit that we have one.

It is unwise to think what happens to others will never happen to us. Being prepared and have some knowledge about drug addiction is better than knowing nothing about it. That is why it is so important to see “Beautiful Boy”, “Let Me Fall”, “Ben is Back”, or “Requiem for a Dream.” And as for the performances, there’s nothing much I can tell other than Timothee Chalamet, Steve Carell and Maura Tierney will break your heart in a way you will never be able to fix. Chalamet and Carell give life to such an important story of survival of Nick Sheff, his connection with his father and how the two would look for each other for two different reasons, which is truly fascinating and admiring.

In the end, “Beautiful Boy” is a remarkable film about a father being so closely attached to his son and the determination to somehow not give up. Indeed it’s a sad and super emotional story, but it’s masterfully directed, puts all the emotions in place and lets the viewer live with it long after the credits roll, which I highly recommend not to miss.