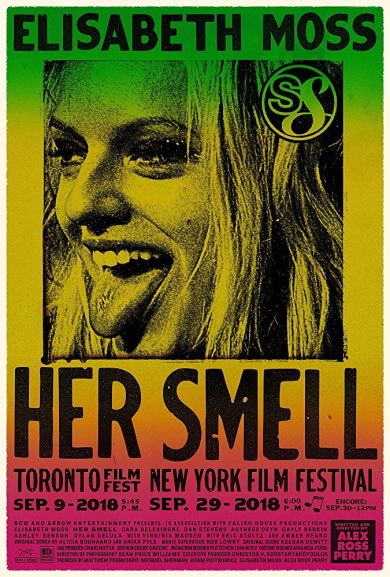 I have always believed that the best film is the one that’s not liked by every single viewer. For instance, how many people are going to like Lars Von Trier’s “Dogville” or Claire Denis’ “High Life” or Brady Corbet’s “Vox Lux” or Jonathan Glazer’s “Birth”? All those moves are meant not to entertain but to teach, bring some value to our daily life, yet enjoy it as something we always can get back to if we want to discuss intelligent cinema. The same will apply to Alex Ross Perry’s “Hell Smell”, which is something the writer/director must surely be proud of.

Lately, only “Vox Lux” has covered the pop star culture, but in a different context. “Her Smell” follows Becky Something, a young and talented musician who tuned herself onto a self-destructive path that can ruin not only her band, but even cause instability of her own child. As she goes through her nightmarish, chaotic and sometimes hard to describe behavior, the woman alienates everyone who cares about her, while her band as well starts thinking about what to do next.

Becky constantly uses drugs. In fact, in the first one hour and half of the film, you never see her sober. She falls down, throws up, drops her own child, swears, and attacks her band. Overall, with her crazy eyes, the only place you might find that suits her is her crazy house. And that’s without exaggeration. But at some point, she will fall all the way to the bottom of disgrace, from which she is the only one who can help herself. But will she be sober enough to realize that and learn from mistakes is something worthwhile learning. But before you do that, be prepared, “Her Smell” is not just a random movie. In fact, pop-corn lovers will disapprove of it as it does not have that much entertainment. But the question is, what kind of entertainment should we expect from someone who is about to destroy her own life?

The tour-de-force performance delivered by Elisabeth Moss is stunning. Every single scene she appears in is pure joy to watch. She brilliantly understood Becky’s struggle or her narcotic condition and travels into her mind transforming herself into someone else. Honestly speaking, we don’t see performances like this every day and we don’t really have to when we have “Her Smell” to refer to. But overall, the film is more uplifting than sad. It has one important point to deliver – we can’t fight our battles and fear alone. And that all the musicians and artist out there do their best to entertain us. But the price they pay every day is not known to us. But through “Her Smell”, we finally get a chance to go backstage, the place no one in their sane mind would like to.