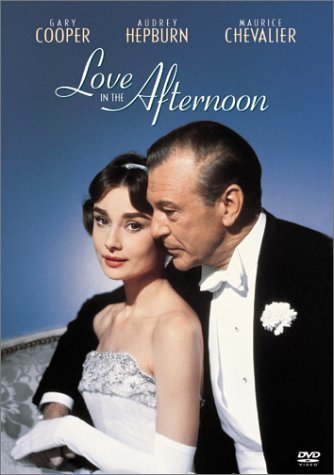 How could film critics from the 1950s not appreciate such a wonderful and touching story of two people, even though there was such a big age difference?

Once upon a time there was a young girl who lived on the left bank, in Paris. Her name is Ariane Chavasse. She is in her 20s, drop dead gorgeous, smart, plays the cello, and is very curious about her father`s work. Her father is Claude Chavasse, a private detective who exposes cheating wives and husbands. They both live in Paris, in the city, where Love is always in the air. Monsier X is a jealous husband who suspects his wife is being unfaithful, but he has no concrete proof. This is why he hires Claude Chavasse to follow his wife, Madame X. He wants to find out who the mysterious man is with whom she is having an affair. But, when he is shown the proof of his wife’s affair, Monsier X becomes angry and tells Claude of his plan to kill the man. Claude`s daughter Ariane overhears the threat and tries to warn the man, who will be killed at 10 PM that evening. Ariane, in a rush, tries to save Mr. Flannagan’s life, forgetting about her own. Oh no, she definitely not going to die… However, when she meets Mr. Flannagan, she falls completely, head over heels, in love with him. She always has prior engagements in the evenings though, and finds it impossible to date him only in the afternoons. Mr. Flannagan is amazed by this mystery girl, however, does not take her seriously until the moment she starts to tell him the tales of her former lovers. Soon after, he is very surprised to find himself jealous of her past. The only man is able to help him solve the puzzle is Claude Chavasse, a private detective, a father of Ariane, who Flannagan decides to hire…
From “Sunset Boulevard” to “Sabrina”; from “The Seven Year Itch” to “The Apartment”; from “Some Like it Hot” to “The Emperor Waltz”; if you`re a-black-and-white movie lover, then you know that all the aforementioned masterpieces have been directed, and most of them written, by Billy Wilder. Billy Wilder was one of those film-makers, who knew, and was able to predict the future through his films. Certainly, “Love in the Afternoon” is among these.
The story of a middle-aged playboy who is fascinated by the daughter of a private detective, was not welcomed in 1957. Even though at the time, when “Love In The Afternoon” had been released, the majority of critics and viewers were disappointed to see Frank Flanagan played by Gary Cooper. They thought him miscast due to his age. Certainly, in the black-and-white time of Hollywood, it was unacceptable to show a young girl in her 20’s falling in love with a man who is much older than herself – by almost 30 years. 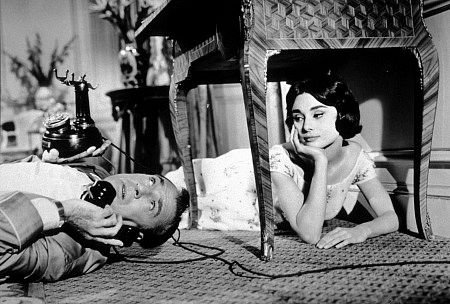 However, we live in the “colorful” time of Hollywood, where people in the 21st Century don`t mind seeing and examining the romance between two people with a big age difference between them. That is exactly what Billy Wilder had offered us by casting two of the greatest actors of the Golden Age, with Audrey Hepburn as Ariane, while Gary Cooper plays a middle-aged playboy in the film – this makes more sense now than it did then.
Ariane, is played incomparably by the most naturally beautiful and extrememly talented actress of all time, Audrey Hepburn. Frank Flannagan is a middle-aged playboy, played by the legendary Gary Cooper, whose impact on the emerging talents in the film industry is undoubtedly huge. Having both these incredibly talented actors in one film is always a huge delight for movie lovers.
“Love In The Afternoon” is one of those films that will leave footprints on your heart.
Nowadays, the writers can`t write the smart, funny dialogue they used to. After watching one of the current comedies, you won’t remember anything of the film you have just seen. And, since the film didn’t impress you much, you may even forget the name. However, we should be thankful to Billy Wilder, who wrote the script for the film in a way that will make you want to take notes throughout the film since the dialogue is exceptionally smart and funny. And why not? It always good to use one of the quotes in the old films, especially, from “Love in the afternoon”.
Billy Wilder`s “Love in the afternoon” is a very fine, sophisticated romantic comedy. It has wonderful improbabilities and charming humor. The acting is superb. After watching this film, I had one simple question: “How could film critics from the 1950s not appreciate such a wonderful and touching story of two people, even though there was such a big age difference? After all, love is the only feeling that is real in any time line- even if that time line is The Golden Age of Hollywood.