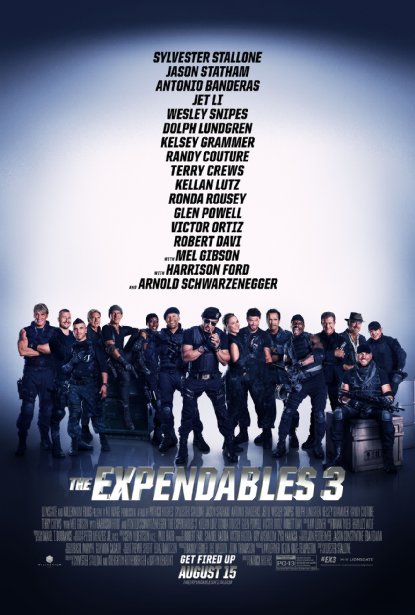 When the CIA does not want to do sensitive work that might cause them lots of problems, they call Barney (Stallonne) for help. In the third part of ‘The Expendables’, our hero Barney, receives a new mission from operation officer Drumer (Ford). He asks Barney to eliminate an arms dealer selling guns to the Middle East. When Barney realizes who his real target is, he teams up with ‘The Expendables’ team once again. They fight a ruthless enemy, Conrad Stonebanks (Gibson), who, years ago, along with Barney, co-founded ‘The Expendables’. Now, two former friends and brothers in arms, have to meet face-to-face against each other – one who is determined to destroy the team, while the other, is determined (Barney) to protect it.

It’s always interesting and fun watching action films. It always fascinates me how the whole crew can manage to blow up a car, helicopter, or huge buildings in a matter of seconds. This is definitely a big achievement in cinematography. However, to me, the best thing about ‘The Expendables is not all the cool stuff you usually observe and love to watch over and over again, but rather, the cast, which I found completely mind-blowing. But let`s start from the beginning.

The opening scene of the film begins with Barney and the team trying to land a helicopter on a moving train, while the soldiers inside of the prison open up with a giant machine gun. The Expendables are on the way to save Doc (Wesley Snipes), who joins the team to eliminate a cold-blooded and cruel arms trader- whose real identity is concealed at the start of the film. When Barney finds out who his real target is, and with one less man on the team, he sends them home to let them live their lives while they can. Meantime, Barney decides to recruit a new team; younger, hungrier, and more willing to take a bullet. But will the new generation of ‘The Expendables’ be able to replace the old blood, the experienced team, to do one last mission – to eliminate, Conrad Stonebanks, an evil, dangerous adversary?

Patrick Hughes had the easiest task ever – directing a film full of experienced action film actors, who know very well how to jump, shoot the target, kill the enemy, fight, and to die – if it`s required. Having such huge actors in one film does not require a perfectly written script, and nobody wants to make another “Face Off”, where as you remember Nicolas Cage and John Travolta masterfully performed their roles. The main theme of the film- “bring back old crew, add a new one, and bring down the enemy”- has already been made a success.

There were a couple of missing parts in the previous film which were fulfilled in this one; and that is the cast that I was glad to see together again – Mel Gibson as the ruthless, really bad guy, and Antonio Banderas, who is probably is one of the cutest and funniest characters in the entire ‘The Expendables’ franchise. And with Wesley Snipes as a new character, this film is even more interesting. Snipes is in excellent shape, as if he was in his thirties. Statham, Schwarzenegger, Lundgren, Couture, and Jet Li appear again in part three, along with some actors you may recognize– Harrison Ford, Mel Gibson, Antonio Banderas, and certainly, Stallone.

In conclusion, the new ‘The Expendables’ will not disappoint, and you will see a long-awaited cast together; seeing Gibson as a villain is a joy; Banderas as a funny character is adorable, and Ford, as an operation officer, is determined and fearless. This new generation of action actors look acceptable, but not as great as the original team. However, old and fresh blood fight selflessly and formidably to meet the viewers expectations. If Stallone brings us ’The Expendables 4′, I would definitely see it- ‘The Expendables 3’ is an excellent film.