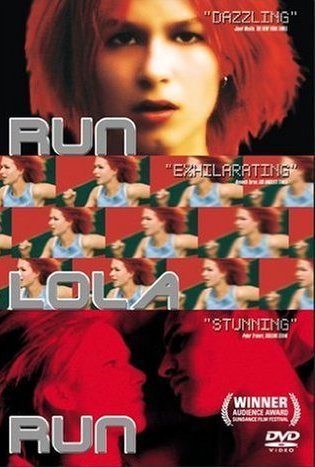 Written and Directed by: Tom Tykwer

There are many ways to spend twenty minutes of time. People will spend it on various things – some might take a short break from work; another person can get a quick lunch or go for a walk. But in Germany – a young woman named Lola has totally different things to complete in her twenty minutes, especially after she finds out that her boyfriend – Manni – is in some big trouble and is threatened to be killed if he does not acquire one hundred thousand German marks in due time. Lola does the only thing that seems right to her – she has to get the necessary amount of money at any cost and to do everything possible to keep her desperate boyfriend from robbing a supermarket, as she knows that this would only compound his troubles. Lola has only twenty minutes – a whole one thousand and two hundred seconds to reach her destination to keep Manni from making a fatal mistake. Now she must run as fast as possible. Not a single pause, no looking back… All she can do it keep running to reach the only person who might be capable to help – her father.

The action/crime drama “Run Lola Run” starts with the leading character – Lola, played by Franka Potente (The Bourne Identity), picking up the ringing telephone to hear her boyfriend on the other end of the line tell her the story of how he lost a huge about of the money. He blames her for not being at the required destination. Now he will get killed because of all that. Lola asks him to calm down and to tell her the whole story from the beginning. And so he does. Lola begs him not to do anything that he might regret later and asks him as nicely as possible to wait for her. She promises to meet him at the phone booth with the needed one hundred thousand marks (at the time of the film it was equivalent to €51,000 or US$56,000). They both know that there is no way that she can get that huge amount of money. However, he has to trust her. Lola has got twenty minutes before he will cross the street and rob a supermarket. What happens next is a Lola’s mind-blowing journey to her goal. So she runs as fast as possible to keep her promise and not let her boyfriend down. Not this time. She doesn’t need a bicycle, a car or a bus to get her to the destination. The only thing she has to rely on is her legs, her speed and her capability to run as fast as ever. But is it still possible to get to the appointed meeting in twenty minutes? The answer to this question is unknown even to Lola. The one and only person to answer this question – is named Tom Tykwer – the writer and director of this film. With that said, I can only add – ‘with Tykwer you can never know…’

European filmmakers always come up with excellent ideas which enable them to make extraordinary films like “Run Lola Run”. To name a few – “The Experiment” aka ‘Das Experiement’   masterfully directed by Oliver Hirschbiegel, “Good Bye Lenin!” by Wolfgang Becker. As you may notice, all the above mentioned films are written and directed by German filmmakers. Tom Tykwek is one of the heavy- weight directors in cinema world and is widely known around the globe. Tykwer is one of those directors who never start filming until they have thoroughly studied the script and every detail of the story very well to ensure that it will be conveyed onto the big screen just as it is written. This is what makes “Run Lola Run” so unusual, astonishing and memorable – it was filmed the way Tykwer wanted – he studied the characters, he does not give them enough flexibility and this allows him to orchestrate their every single move exactly the way he wants.

The German actress Franka Potente plays the role of Lola – a young lady, who runs throughout the entire length of the film without showing any sign of fatigue. This shows Potente’s excellent physical condition prior to the start of filming. Potente does a tremendous job keeping Tykwer’s idea alive and vibrant.   She delivers excellent performance and disciplined hard work for her role. All that contribution and with Tykwer as the director, she is the real star and the one to make the film “Run Lola Run” what it is.

Moritz Bliebtreu (The Experiment) plays Lola’s troubled boyfriend – Manni, who leaves her no more than twenty minutes to rescue him from the life-threatening danger he got himself into. Bliebtreu performs his part unspeakably well and gives Lola many opportunities to show him her unconditional love and willingness to do anything possible to help him. Bliebtreus exhibits Manni in a really sweet manner and convinces us that he really deserves to be saved by the incredible running girl – Lola.

In conclusion, Tykwer’s “Run Lola Run” leaves us with an incredible feeling of something we can’t readily describe or even define. The Director tells us absolutely everything about his characters, even those who only appear in the film for a second. Even so, this is more than enough to get to know the person who crosses the path of Lola on her way to rescue Manni. “Run Lola Run” is one of the finest films I’ve seen in a long time and even though it was released in 1998, it still feels fresh, engaging and up to date, as if it were released just a month ago. This film has an absolute power over the viewer – leaving us no chance of seeing or predicting what comes next. But we don’t really need to look for an explanation when it comes to Tykwer’s films, because just at the moment you think you have it figured out, he will turn everything upside down so masterfully, that even when you watch the film again it will leave you with the same feeling you had the first time…