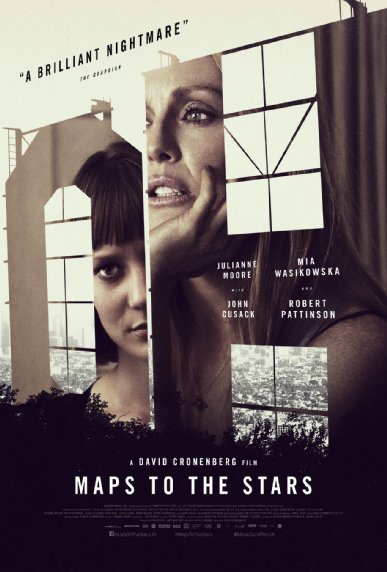 A World with no place for sane people. A World full of drugs and opportunities to cross the most unimaginable lines. A World where only the strongest can survive. This is a World of determined people – those, who know how to control their temper; how to balance between their own craziness and normality; how to lock up their personal devils deep inside of themselves. This place draws for you a map with no escape route – because once you reach for the Stars there is no way out – falling all the way down as a fallen star. Welcome behind the curtain of Hollywood! Please, fasten your seatbelts, as “Maps to the Stars” will take you right into the heart of a Hollywood family, who chase not only one another, but also the relentless ghosts of their past.

Agatha (Mia Wasikowska) is on her way to Hollywood to visit her internet friend – Carrie Fisher. Benjie Weiss (Evan Bird) is a Hollywood child star, who is about to begin filming the second part of the film that brought him success and popularity. Havana Segrand (Julianne Moore) is a falling star, who struggles to get a role that might help her regain the popularity she once enjoyed. All these people have one thing in common – they are haunted by the ghosts of their past. Being in the middle of instability and madness, the characters of the film will try to find ways to rescue themselves from the almighty stars that try to swallow – leaving nothing, but empty loneliness in their hearts.

I believe not every writer can compose such a wicked script, which I should also name – a perfect script. A script, which gives space for the actors to improvise with their talent as well as allows them to transform into the character they will ultimately portray. Bruce Wagner masterfully wrote this script telling the stories of three Hollywood families haunted by their past. This is a welcome surprise and an amazing discovery to see such a skillful writer, who without fear goes over the boundaries to develop the story to such an extent that in the end it simply leaves us stunned and speechless – in a good way, of course.

“Maps to the Stars” is directed by the Canadian filmmaker David Cronenberg, who is also known to the cineastes as the King of Venereal Horror or the Baron of Blood. The director found the exact recipe to convert Bruce Wagner’s piece into a stunning film. Cronenberg has directed several widely known films, such as “A History of Violence” (2005), which brought an Oscar Nomination to the actor Viggo Mortensen and “Cosmopolis” (2012), starring Robert Pattinson. However, Cronenber has never gone this far in exploring the actors’ talents and allowing them to show such powerful performances as he does in “Maps to the Stars”. Cronenberg has probably made his best choice ever by casting Julianne Moore as Havana Segrand – a woman who loses her mind every day and crosses all possible and impossible lines to make this film into a piece of art, which the audience will watch with great joy and delight.

Not many actors would disappear/dissolve into their character without changing the actual look of the character. Here, we should thank the Gods of Cinema, for the unlimited talent of the actress Julianne Moore, who not just nailed the role of Segrand, but perfectly did what the story required from her – losing her mind over and over again. Here’s what happens to the lead character – Segrand. She is a Hollywood actress, whose popularity has faded away long ago, but there is a glimmer of hope that she might get a chance to perform as a character she wants badly. However, her state of mind does not allow her to control her temper; therefore, she loses her balance so easily and quickly within a blink of an eye. Moore’s excellent performance will not leave any viewer unmoved, and will probably provoke desire to give her a standing ovation for her stunning performance. If I could describe Moore’s performance in a specific way, I would say the following: with the most compelling, powerful and demented performance of her career, she literally has crossed all possible and unimaginable lines to fulfill the character the way the script requires. I truly believe that she has left almost no doubt, that she does deserve an Academy Award and deserves to be one of the strongest contestants for the Oscar well ahead of time, as I see no one else who could be better than Moore this year.

In conclusion, “Maps to the Stars” is an absolute triumph and masterpiece. It’s the nightmarish satire of the nowadays Hollywood – with a dose of pharmaceuticals, and an absolutely stunning performance from the entire cast. Probably, “Maps to the Stars” will not be liked by every viewer unanimously. But one thing every viewer should know before watching this film is that the movie has been directed by David Cronenberg – a master manipulator, who brings the story to perfection. No matter what happens to our characters throughout the film – in the end they are left with only one thing in their hands – a Map to rise to the Stars.