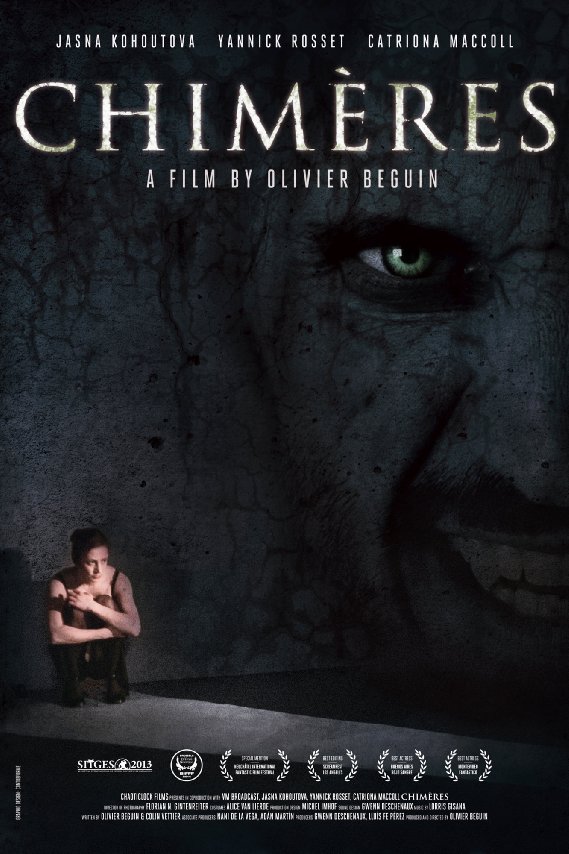 Distributed in Canada by DFlms

A young couple – Alex (Yannick Rosset) and Livia (Jasna Kohoutova) are on vacation in Romania. The trip seems to be peaceful and without any remarkable events, until the moment, when Alex is hit by a car: and there the nightmare starts. Alex is taken to the hospital and is given blood transfusion to save his life. He receives proper treatment and returns home with Livia. Life could have returned to normal, if all of a sudden Alex did not start to develop strange new symptoms, which provoke suspicion that perhaps he is turning into a vampire.

Mysterious Romania – the motherland of notorious Count Dracula, whom we all know for his love of drinking human blood, is an excellent setting for telling a vampire horror story. In his award-winning debut – “Chimères” (winner at Fantasporto 2014, Neuchâtel International Fantasy Film Festival and Screamfest 2013), Swiss film director Olivier Beguin creates his own vampire reality, which is not about Dracula, but a young and talented painter, who gets a nightmarish disease and transforms from a kind and loving person into a careless monster. Now, he will not stop until he gets his share of blood.

Olivier Beguin had initially planned to make his first film as a ‘mix of thriller and road-movie’, but later changed his mind and, as a result, we get an unusual story of devotion and love with a mix of vampirism, horror, drama and action. The screenplay of “Chimères ” is co-written by Beguin and Colin Vettier. It is particularly interesting how the story describes the relationship between Alex and Livia, who are just ordinary human beings with their own desires and weaknesses.

As an artist, Alex seems to predict his inevitable future through his paintings, which depict the growing darkness inside him, of which he is yet unaware. Beguin creates Alex as a very kind young man, who truly loves Livia. Even when his thirst for blood goes beyond his worst nightmares, he still tries to protect and not hurt his beloved girlfriend. On her behalf, Livia is amazingly supportive of him even when he undergoes the ugly transformation, which brings nothing but disaster to his hopeless situation – turning him into an incredibly dangerous person with deadly desires.

I’d like to mention a few scenes, which I find masterfully written and performed impressively by the cast. For instance, the scene, when Alex confesses to Livia that he believes he is turning into a vampire. Livia does not believe him; so she fills a glass with her own blood and offers him to drink it. When Alex drains the glass, the expression of shock on her face is simply priceless.  What truly makes this film remarkable and different from other vampire films, is how Livia helps Alex in his struggle by giving him her own blood in order to protect innocent people.

Beguin’s directorial debut is an interesting love story with a mix of everything. In the end – love, insanity and unspeakable reality win. But in reality what is offered to us by Beguin – is not what we expect. The director finds the only way to give spiritual freedom to his heroes and allow them to do what they want under the given circumstances. This truly makes this film interesting to watch and gives us a deep compassion and admiration for both Alex and Livia, as their love, faithfulness and willingness to help each other truly has no limits.