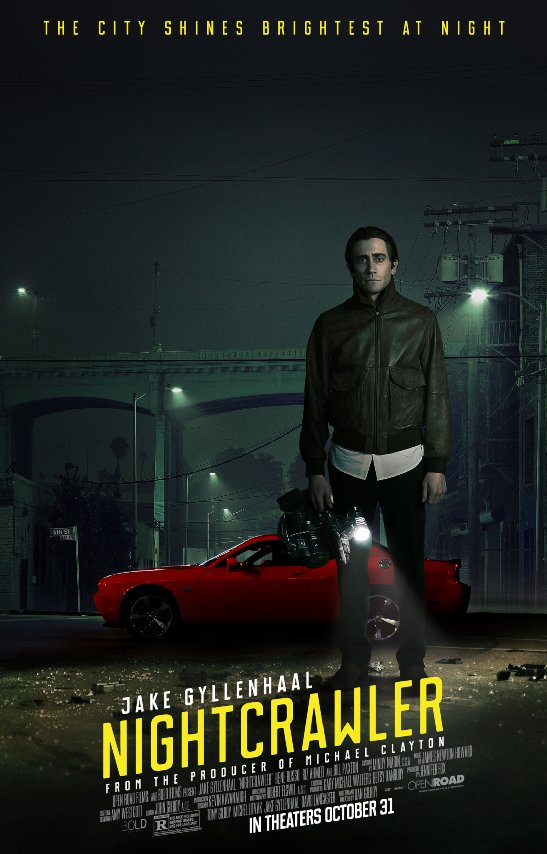 Written and Directed by: Dan Gilroy

Blood; murders; drugs; fatal car accidents on highways, homicide victims; shooting in a school or in a public place… Unfortunately, all these accidents appear daily on the television breaking news nowadays. According to TV affiliates – this is what the audience demands for. What makes those “breaking news” is another horrifying story to which we are not privy. What really hides behind so called “flash news” is nothing like what we face in our daily lives. The creators of “Nightcrawler” invite us into a world, which we should not hesitate to see, even if we may not like at all. They unveil a simple truth – behind all those bloody breaking news, there are stories of regular humans, whose lives are worth more than a piece of recorded video. Sufferings of these people, their desperate battle for life is often lost to the cameramen, who see them as a source of good money and a possible way to move up.

How far will a desperate man go to get a job? In fact – just any job. Lou Bloom (Jake Gyllenhaal) is an eloquent and smart young man, who knocks at every single door to find a job. A life changing moment comes, when he realizes that there is something he is excellent at – hunting for breaking news. He allows himself to enter the world of L.A. crime journalism, where as a beginner, he crosses every single line in order to dramatize tragic events and turn them into something big. His eagerness for bigger news transforms him from an observer into a participant, which makes him more dangerous to those around him. Now there is only one hero – himself. Lou couldn’t care less about others. He receives tremendous support from graphic scenes fan and TV-news veteran – Nina (Rene Russo). None of them would hesitate to show graphic scenes even at the time when people are enjoying their morning meal. 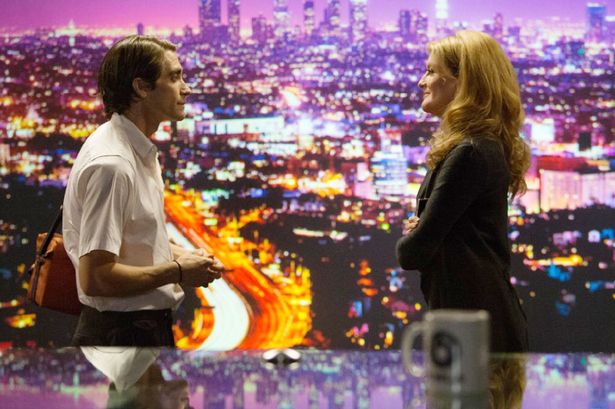 What makes “Nightcrawler” one of the most perfect and masterfully made films of the decade? Well, for me the answer is pretty simple – Dan Gilroy – best known as the writer of such films as “The Fall”, “Real Steel” (story) and “The Bourne Legacy”. Fortunately for all of us, this time he takes over the camera and makes his directorial debut in a truly magnificent way, which will terrify us all, but also inspire many young dreamers to try their own successful directorial debuts one day. Gilroy’s “Nightcrawler” is dark, creepy and shockingly realistic. Unfortunately, that makes it really close to what we usually see on TV. This compounds our fears when we get back to reality after the final credit rolls.

Nice-talker Lou Bloom’s beautiful dialogue in the opening scene of “Nightcrawler” is already a promise that the film has something special to offer. Nevertheless, I wouldn’t want to reveal too much to raise my readers’ expectations for Gilroy’s debut feature, which may result that you would expect more than it can deliver. Trust me in one thing – at some point it will exceed your expectation. This is why I should leave it up to you – the viewer – to decide how to define “Nightcrawler” – a masterpiece, unique, excellent, scary or maybe not worth watching at all?

Jake Gyllenhaal, Renne Russo and Riz Ahmed are the real heroes of this fantastic film. They truly shine in every scene, leaving an inerasable trademark by their performance. Gyllenhaal has delivered one of his most memorable performances since “Brokeback Mountain” in 2005 (which earned him Oscar nomination and BAFTA award). That is a long time for such an incredibly gifted actor, who has been brave enough to perform any kind of role showcasing his endless acting possibilities. Gyllenhaal’s character is smart, intuitive and has only one skill – to talk convincingly and use his charm building phrases in a way no one else can. Some of the long monologues given by Gyllenhaal are truly remarkable and show how well he prepared to perform his role – exactly the way Gilroy wanted – no more and no less.

There are two unforgettable scenes in the film. To be honest, there are many more, but I chose to underline those particular two. The first scene is when Lou goes wild in front of the mirror (almost like Channing Tatum in “Foxcatcher”); and the second – when Gyllenhaal and Rene Russo are in the Mexican restaurant. In this scene both actors deliver performance, which will leave you speechless. I would believe their dialogue well deserves to enter the history of cinema for being endlessly creative.

“Nightcrawler” is one of those films that reveals the reality of news agencies and does it in a perfect way. Still, the film would not be as perfect as it is without the soundtrack by James Newton Howard, who creates the perfect environment to let us experience the whole story first hand. “Nightcrawler” is certainly a must see – even more than once. It well deserves a visible place in every cineaste’s collection. After all, the film makes its viewer wonder whether this kind of “breaking news” is what we have demanded to see daily on TV during our breakfast or lunch break.  My answer as a viewer is “no”. What would be your answer after watching the breathtaking and spectacular “Nightcrawler”?