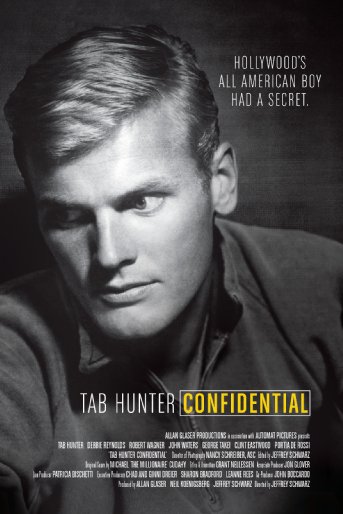 Back in the 1950s it was impossible to come out as gay. Anyone who would confess their sexuality would have been locked in a mental home to cure them from a possible mental disorder. In the Tab Hunter Confidential documentary film we find out, no only about Tab Hunter`s sexuality, but also how Hollywood tries to protect the reputation of any star who brings in big money, such as Tab Hunter.

Tab Hunter Confidential is an absolutely entertaining, and very educational documentary film about Hollywood`s Golden Era, and we learn more secrets than we could have ever known otherwise. Tab Hunter opens up in this film to tell us everything he thinks the viewer needs to know. It will begin with his arrest and how he became a matinee idol; from a teenage stable boy to a closeted Hollywood star of the 1950s. And the most interesting part begins right after, when Hollywood`s all American boy had a secret that could have been a heart-breaking for millions of young girls.

Jeffrey Schwarz offers the viewer an incredible and remarkable journey back to ‘black-and-white’ Hollywood, and begins with Tab Hunter and his contract with Warner Brothers. With this contract he was able to play in some decent roles with Hollywood starlet`s, such as Natalie Wood, Sophia Loren, Debbie Reynolds, and many others. But probably, one of the saddest parts of this film is offered in a chapter dedicated to Hunter`s relationship with Anthony Perkins, which almost caused Anthony Perkins to have an emotional breakdown.

Tab Hunter Confidential reveals the darker side of Hollywood where because of someone’s sexuality, along with social media, the most influential and powerful tool available, a person’s reputation and career could be ruined forever.  It`s interesting to see how one person, who so long ago, influenced Hollywood so tremendously with his personal choice.  Schwarz`s film is engaging, sometimes terrifyingly brutal to see how one`s film career is created and destroyed by the huge Hollywood studios at their whim. Despite that, it`s a beautiful journey back in time to see a world and an environment created by Hollywood, that was hidden because of prejudices and rules that were prevalent in our society at that time. This is a must see documentary film that by all means will open closed eyes, and expand minds, and once again portray how important it is to always stay true to yourself, the way Tab Hunter did.