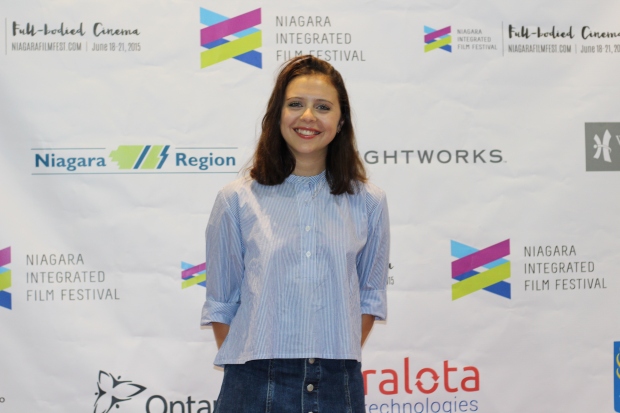 Acting is not an easy job, especially, when you need to portray such difficult character as Minnie from The Diary of a Teenage Girl, played brilliantly by young, and very talented British actress, Bel Powley. Powley`s Minnie is a young girl who embarks on an enthusiastic sexual odyssey, beginning with her mother`s (Kristen Wiig) current lover, Monroe, played by Alexander Skarsgård. During Niagara Integrated Film Festival, I had the extreme pleasure of having a few minutes with Bel Powley to talk about her unforgettable journey, called The Diary of a Teenage Girl.

MOVIEMOVESME: What attracted you to play such an interesting character as Minnie?

Bel Powley: The fact I feel like it’s never been done before with a female character. I feel the female characters these days are very 2D. There’s the princess waiting for her prince charming, there’s no well-rounded characters that represent teenage girls. I think this is the first movie with an honest depiction of a teenage girl that I’d ever read and I really wanted to be a part of that. I also found that I had got the part about two months before we started shooting. Marie encouraged me to start listening to 1970s music and all the things you need to listen to. I got to know the movie based on a book and there’s always a decision to be made as an actress whether you should read the book or not because the book is told from a point of view. Yeah I had a lot of accent training, Marie encouraged me, rather made me.

MOVIEMOVESME: It is a very interesting and very unpredictable character, and… she’s in a relationship with her mother’s boyfriend.

Bel Powley: It’s actually based on a true story, so it is sort of autobiographical. And yeah she loses her virginity to her mum’s boyfriend. For me playing the role, I tried not to think about it too much because the character, Minnie doesn’t think about the age difference. She’s in love with someone, that’s who she’s into. I couldn’t let that affect me, I couldn’t judge it as a person because I had to be involved. I respect Alex and Kristen Wiig so much as actors. They’ve done so much work that I love, it was quite surreal being with them on set. Kristen honestly like the nicest woman, is hilarious as you’d imagine.

MOVIEMOVESME:  How did you prepare to play the character of Minnie, your relationship on the set with Marielle Heller and Alexander Skarsgård? Did Marie help you through the intimate scenes where you and Alex were both comfortable?

Bel Powley: Actually, it was easier for Minnie because she’s in every scene and like every other line was mine. So I prepared for it in a way I do for theater. I learnt the whole script by heart before we started. I had a lot of accent training, really got into her head before I came to set. Minnie is very unique. It shows in the beginning than when you’re a teenager your feelings are so much more visible. I definitely had to tap back into that because now that I’m an adult and more mature you keep your feelings in check. But when you’re a teenager you can’t do that. The extremity of emotion is different than what I feel now, so tapping back into that was useful. Alex (Alexander Skarsgård), me and Marie (Marielle Heller) rehearsed for two weeks before we started shooting. Alex and I had plotted his character’s and Minnie’s relationship scene by scene so we always knew where are characters are coming from and how they need to be in that moment. I haven’t done a sex scene in a movie before, but once I got on set it was very easy. Of course we had a closed set and having a female director than a male director helps. It was a collaborative effort that way. I know it was going to be methodical so I was comfortable doing it. Also Alex has done nude scenes, he’s the king of sex scenes, so he knows exactly what he’s doing. It also was really interesting to see how he plays straight because he doesn’t do that much. Alex was great, he was such a good support, such a good friend and we really bonded during the filming process.

MOVIEMOVESME: I’m sure there were challenges on set?

Bel Powley: Yeah definitely, my relationship with the director is very close. I feel like she’s my best friend or my big sister. I feel I’m really glad that it was a female director because we could both relate to each scene in the same way, whereas if it would have been a man it maybe wouldn’t have been the case. She was really open to discussion, we had two weeks rehearsal before we started. Whatever we said she listened to us and if she didn’t agree she contested us, so it was a very open floor for discussion.

MOVIEMOVESME: Did you improvise in your portrayal of Minnie?

Bel Powley: I mean I always tell people you don’t have to have slept with your mum’s boyfriend to relate to this movie, you just have to be a teenage girl and understand the visceral feelings you have as a teenager, so I related to it completely on that level and brought a lot of myself to the role. Also there’s a fine line between you and the character and I made sure I treated that carefully.