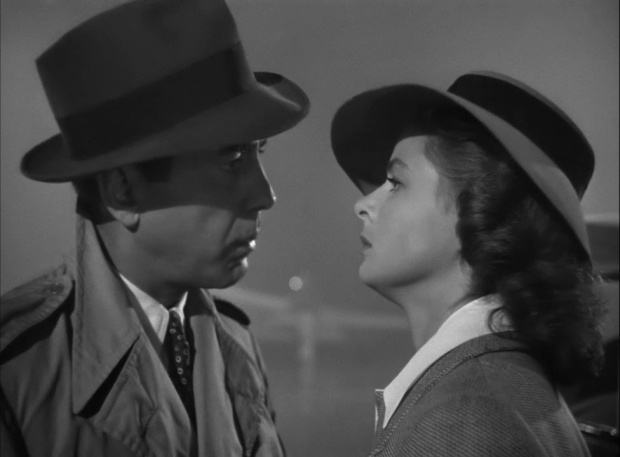 Only few movies are able to touch millions of hearts, but none of them have managed to leave a huge legacy behind the way Casablanca did. Taking the first place of AFI’s Top 100 Love Story Movies tells something to anyone who doubts the power that this movie still has… And after so many years, once you re-watch it, you understand why Michael Curtiz’s Casablanca is the symbol of movies made about love. It’s because it shows us the true meaning of love; a love not dependent on sacrificing to win the heart of the one you love. But a love, after having sacrificed everything you had, including your freedom, to let the woman you love have a life and promising future without pain, suffering and struggle that war usually brings. And in the end, to let her stay with the man who loves her as much as you do…  And does it really matter if you’re left with a broken heart, when she is on her way to have a safer life?

Two German couriers carrying official documents are murdered in a train from Oran. Right after that, Casablanca falls into the chaos where countless arrests are made in order to catch the person who killed them. But there’s only one place in this chaotic madness that lives its own life, like nothing’s happened, Rick’s Café Americaine, owned by Rick Blaine (Humphrey Bogart), an American man with a mysterious past. From his own words, we find out that “he would never stick his neck out for anybody”, not even for Victor Laszlo (Paul Henreid), a freedom fighter who is expected to visit his glorious café the same evening with hope to get transit letters. But Rick’s creed soon changes when he meets Victor’s companion, Ilsa (Ingrid Bergman), a woman for whom he would not mind sticking out his neck anytime….

There’s always a strangely beautiful atmosphere present throughout the movie that can blow away your mind with its beauty. Curtiz’s Casablanca brings back sweet memories from the Golden Age of Hollywood, where making movies were more than an art, and the story bigger than life. The scene where Ilsa and Rick meet is one of the most powerful, where their love for each other is visible to the naked eye. And in order to see that, all what we needed is the look of Bogart and Bergman that could have convinced us anything, as long as they share the same scene. Despite the desperate fight against his feelings towards Ilsa, soon Rick will give up once again to refresh his memories about Paris, a time he will never be able to bring back… In spite being able to convince Ilsa to have another chance, a man carries a dangerous plan in his head that might kill him… But this is the least price he is willing to pay for her well-being, even though the man she will spend the rest of her life is not him…

In conclusion, Casablanca is a masterwork for all times. Humphrey Bogart as Rick and Ingrid Bergman as Ilsa put a timeless stamp on their roles as archetypes. Both actors gave their best performance in their inarguably great careers. They both look so natural, as if they were born to play Rick and Ilsa. And in the end, in addition to those what was said in the last 73 years, and described in famous song, As Time Goes By, “Casablanca is still the same old story a fight for love and glory. A case of do or die. And the world will always welcome lovers, as time goes by…”