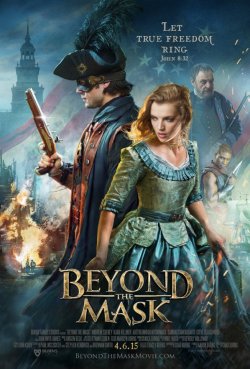 Sometimes in order to redeem your name you don’t need to enter the path of revenge. A British East India Company assassin, William Reynolds escapes an assassination attempt but soon finds himself on the run. A run away from the cruel Charles Kemp who is about to destroy a young nation’s hope for freedom. Having strong faith in God, and believing that revenge won’t bring him satisfaction, William goes against his former employer, not only to restore his reputation and prove that he can be a better man, but also help other people in their peaceful fight for freedom… But as you may know, when guns and dangerous people are involved in a battle, there’s never peace until the undeclared war is over… And now the only hope of those who so desperately need help is a man, behind the mask…

It was quite a strange feeling watching Chad Burns’ Beyond the Mask on the big screen as it felt like the movie was made for TV. However, I found it much more entertaining and interesting than the recent Fantastic Four which left the viewer with nothing, but the feeling of disappointment. Getting back to Burns’ movie, from the opening scene we find William as an assassin who works for Charles Kemp. After he accomplishes his duty successfully, William expects to get back to normal life and settle down a bit, but Kemp thinks otherwise.

When William rejects Kemp’s offer to go to America, he ends up in a carriage that is about to blow up… By luck or fate, William survives. As the film progresses, we find William being saved by a woman, and soon they fall for each other… But in order for them to live happily ever after, William understands that with his reputation and past, he won’t have a future until he restores his name that has been stained by Kemp.

Beyond the Mask is a movie that I must admit surprised me a lot. Despite its obvious low budget, it manages to maintain its root and continue the way that the viewer won’t ever find himself bored. The beautiful and colorful photography, and an excellent score does its job so great that you don’t feel distracted at all.  Actors try their best by providing as solid a performance as possible to raise the movie’s level, which I must say they succeeded in doing.

In conclusion, Beyond the Mask is worth seeing. It is one which will show how important it is not to enter a deadly path if you don’t know how to return from it. Burns’ movie never fails to deliver his point, which I found very important if you want to gain viewer’s trust.  And in the end, you as a viewer is the only one who must decide whether you liked it or not… But in order to reach that point, you need to see it first….