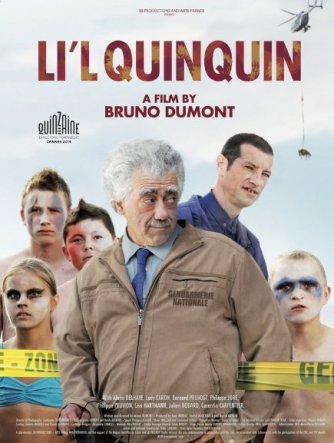 I’ve seen many movies about murder mystery, but never seen one like P’tit Quinquin, created by Bruno Dumont. First thing you need to know before you even start watching it: it’s crime, mystery, and comedy. However, throughout the movie, you most likely will laugh more than scratch your head trying to figure out who stuffed the parts of human body inside a cow. It is not like you won’t care much about solving the case along with detectives, but rather feel a desire to join a crowd and follow them wherever they go. Believe it or not, I highly doubt if you have ever seen this kind of mini-series before.

The series opens with murder mystery, one body after another found inside already dead cow. The only thing a murderer could not stuff in is a human head. Two very much eccentric, and not George Clooney-type detectives arrive at the scene. The body being extracted from inside a cow, they realize the victim is a woman. Two not very smart, but very funny, lieutenant Carpentier and county Sheriff Van Der Weyden are trying to solve the mystery. But things change when they find another body stuffed in a cow. Now, they must concentrate not only on the victims, but on the cow as well… After all, a killed animal is also a victim, isn’t it?

As the series progresses, and lasts only three hours and 18 minutes, you will get a chance to look into the little community from their perspective. Bruno Dumont manages to create jaw dropping characters, in terms of them being so unattractive, many of them with facial ticks, including the sheriff or with mental problems. However, through their look, you see real human nature, which makes this film more like a satire rather than crime film with elements of mystery. The series, set in the small channel town in northern France, will make you wonder how it could be possible no one ever came up with such an idea of all dead people ending up inside an animal, and its reason. And that’s what you, as a viewer must solve, not who did that, but understand the great purpose of creating such characters, the story, and explain it though analysis you must do throughout the film.

In the end, P’tit Quinquin is not for the casual viewer, but only for those who like to read the characters, observe, and find deep meaning out of the ordinary. Because Bruno Dumont has certainly something to share with you that the mini-series you’re about to see is not ordinary at all: it’s about humans, about humans being partially a beast, and the nature of human that will never change. After all, there is a reason why Bruno Dumont’s Li’l Quinquin was named the No.1 film of 2014 by the prestigious French magazine ‘Cahiers du Cinema’. And that was the first time a TV-Series made the No.1 spot in the annual ranking.

Starting September 28, 2015, TFO will have a brand new website offering an ever-expanding selection of subtitled movies to watch free of charge.