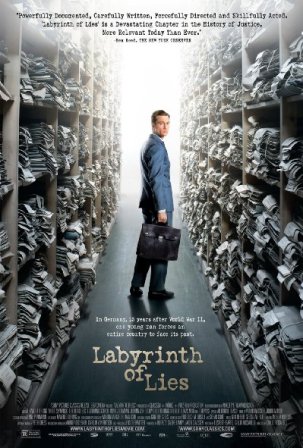 World War II left more scars than anything else in the 20th century. That was one of those times when crime against humanity was not committed by one or two individuals, but by a frightening amount of people, who tried to bury the truth underground. But once you enter the labyrinth of lies and try to escape it, as it usually happens, there will be no way out of it. The lie, the silence and the truth are about to confront you in the middle of a maze where only one of them will make its way out, and lie is one of them. What you’re about to see in Labyrinth of Lies (Im Labyrinth des Schweigens, original title) boldly directed by Giulio Ricciarelli is the darkest chapter of the past that still haunts many and makes it impossible to comprehend. What Ricciarelli offers in his film is something you probably always wanted to see, or perhaps, to hear, but never had enough courage to say it.

Labyrinth of Lies follows young, fresh-blooded and promising prosecutor, Johann Radmann (Alexander Fehling) who comes across some important documents that help initiate the trial against some members of the SS who “proudly” served in Auschwitz. But when he conducts in depth investigation, he realizes that the amount of people who supported the Nazi regime or being the part of it, even remotely, are terrifyingly bigger than he could have expected. But will Johann be able to handle the horrifying details and be ready to make his country face its past is a matter of time, the time that our hero is the only one who must set. But before that, he has to find his way through the maze where the game between the lie – silence – the truth is becoming more intricate and tense with unavoidable result….

Labyrinth of Lies is a film that pulls the still alive and painful wound called the World War II. And in this film you will hear and see the facts that you might have never heard or being told by anyone so loudly. Every scene is full of screams and shouts of the past that tries to find its way to be heard through Ricciarelli’s film. Even though the screenplay is written carefully you still find it brave enough, aggressive and showing no tolerance. It’s amazing seeing how the screenplay creates a sort of labyrinth, the point of it is much bigger. Every time when you move from one scene to another, you might find yourself talking to yourself, or rather with the young prosecutor, cheering for him, when he finds impossible to proceed with anything due to heavy and agonizing past his country lived or made others lived in.

In conclusion, Labyrinth of Lies is an aye opening, superbly written, masterfully performed, well crafted and piece by piece studied film that leaves the viewer nothing but being knocked out by its ability of making direct contact with the viewer. But more importantly, this movie opens up once again how important it is not to forget the past, or mistakes we human beings make. But more importantly, never forget that the past and the future will always find the way to connect through present, and its consequence is not always pleasant. And how could it be, if we throw ourselves into a maze of silence where no one will hear our voices no matter how loud we will try to speak up. With all that said, Labyrinth of Lies is absolutely worth seeing that has power to sober anyone whoever dedicates it two hours; two hours, that will make you observe the real art of filmmaking at its best.

THE LABYRINTH OF LIES opens October 9 in Toronto, Vancouver!

The film opens October 16 in Montreal, with other dates to follow.