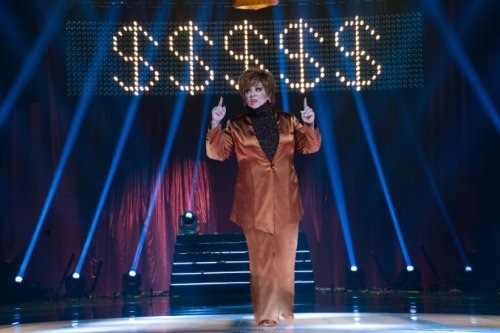 Melissa McCarthy has never been on my “must-watch-actors” list. However, that has changed since the film “Spy”, where I finally noticed her amazing talent to entertain the wide audience. “The Boss”, in spite of being a comedy, has its own moral lesson to teach. It proves that you can take everything from one person; his money, an empire built by hard work, and freedom. But the one thing that can never been taken away is the core source that allowed the prson to build that empire – the brain.

“The Boss” follows Michelle Darnell (Melissa McCarthy), who managed to become the 47th richest woman of the United States. But within a short amount of time, her fame, money, houses and everything else is seized after being caught for insider trading.  After six months of spending time in federal prison, she makes her way out with the hope to rebrand herself and get her old life back. When she realizes that there are no friends left, hated and hopeless and homeless, Darnell goes to only one person who’s willing to accept her: her former assistant, Claire (Kristen Bell) and her young daughter. Soon, Michelle will come up with a brilliant idea to build Brownie empire, by selling super delicious cookies baked by Claire.

When the film begins, we find Michelle being returned to a foster home after adoption. It appears that the terms of the family does not agree with Michelle’s reality, as it always find its way to send her back to the foster house. “I am done with it. I don’t need anybody.” She angrily says, still a teenage girl. “As I am going to right to the top” she continues. Shortly after, as many years pass, Michelle truly becomes one of the richest woman and America’s sweetheart without having a sweet heart. All the money she had allowed her to buy everything she needed, but failed to have one important thing she always wanted to have – a real family.

Through the funny moments, hilarious jokes, we still find Michelle being harsh to herself, while she rejects what is before her eyes. For instance, when Claire agrees to become a partner with Michelle, the disappointed in life woman does what even true friends or family member never does. But that is when Michelle’s personality starts changing significantly, when she realizes that sometimes it’s not money, but a family what matters most. Maybe this time, people who have been screwed over by Melissa’s heartless attitude will be easily forgiven? But whatever it is, you will certainly be delighted to find out after watching “The Boss” co-written by Melissa McCarthy and directed by Ben Falcone.

“The Boss” may not be a great comedy, however, it still delivers a solid amount of positive energy. As there is no complaint performance wise, it’s a story that felt like it could have been more flexible. While McCarthy researches an interesting concept, which is what this film is based on: for instance, how one person can recognize a good gesture when they had no way of seeing it from anyone else before? Or, by working hard, or how having a great life can bring you jealousy of people who will always try to destroy your life. Even after learning that, you will still find some emptiness in the story where it slightly touches the ground, but can’t feel it completely.

In conclusion, Ben Falcone’s film certainly deserves your attention, as there are a few ridiculously funny scenes you would never want to miss. Despite having a coarse language, it won’t hurt your ears, as through that language it manages to deliver the humor in a way for you to find it amusing. After all, it’s Melissa McCarthy’s show. She knows better than anyone else how to play the boss.