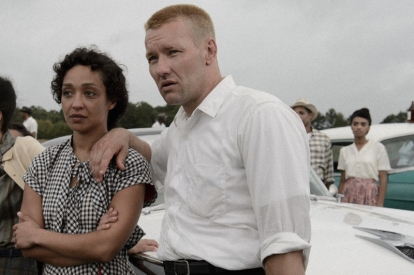 It is always important to make films that not only to entertain the audience but educates, opens our mind and show a way for improvement. Do we have to upgrade our minds or even our vision of life after we watch Jeff Nichol’s LOVING? Maybe we should, or use it as an example how barbaric we were back then when we allowed such an inexplicable rule to exist where the interracial marriage was prohibited.

Mildred Jetter (Ruth Negga) is a black woman, Jeff Loving (Joel Edgerton) is a white man. Both are incredibly in love with each other and decide to marry. However, shortly after the celebration of their marriage, a Sheriff comes to their house to arrest them and are later sentenced to prison. According to the state of Virginia, their marriage violated the state’s anti-miscegenation laws, and due to that were exiled to Washington, DC. After years passed, the Loving family decides to approach the Supreme Court to sue the state of Virginia. The response the family gets will change the course of life of many people afterwards…

Jeff was a very quiet and settled man who would have gone to hell and back for Mildred. Mildred, in the meantime, is intelligent, determined and persistent woman whose every opinion is respected by her husband. Having the perfect match and complete understanding in what they needed to do, or the risk they would gotten themselves in if they get married, the Lovings still disregard danger in the name of love.

Jeff Nichol’s Loving continues with the same pace it begins with. It’s a slow-moving film about an incredibly strong family whose life you would like to see in slow motion to grasp It better. Joel Edgerton and Ruth Negga as Mildred find their match in the film by monumenting the life of two people whose attempt changes the history of not only Virginia, but the United States as well.

In conclusion, LOVING Is a very important film to watch by all means. It shows that love is the only weapon which should be used to win a war. It perfectly captures the violation of the human rights in the country that had to, and still tries to, overcome racism issues. Also, the important fact about the changes happening in the Loving family is one single letter written to Robert Kennedy that helps their case to move on. Saying that, it’s clear that you won’t achieve anything in life if you don’t want work for it. What happened with the Lovings was purely their contribution and the confidence that no one ever can separate them due to any reason, and this film is proof to that.