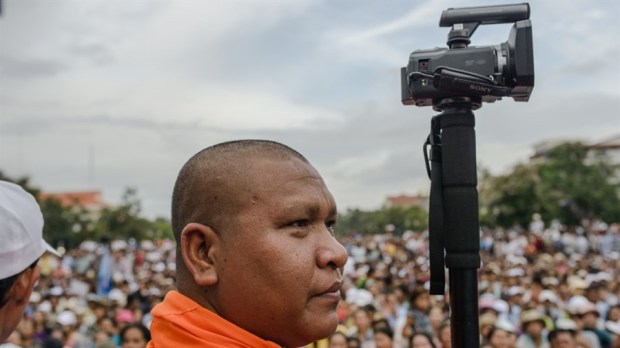 Injustice has a clear definition in any language you wish to search. It can happen to anyone and in any part of the world. But what does not happen often is, when justice that’s needed so desperately does not arrive to a land that needs that most. You see, people do complain every day about anything. But what should the people of Boeung Kak say or do when their houses are at stake? When they can lose anything within minutes? When struggle is the only thing they have to see another day?

During the Hot Docs Documentary Film Festival in Toronto, I had a great please talking with Chris Kelly, a writer, journalist and filmmaker, whose incredible film A Cambodian Spring must be seen by anyone who likes witnessing the history as it happens in his film.

MOVIEMOVESME: What inspired you to make this film?

Chris Kelly: I have travelled to Cambodia in 2006 just as a tourist, and I became very interested about country and wanted to figure out a way to come back and do some work there. So I learned about the issues that were going on in modern political landscape in Cambodia and one of the first things came up with forced eviction and land grabbing in Cambodia, and within two weeks in Cambodia I met the first participant, Loan Sovath at the protest and his was filming with little old smartphone.  I thought what might be interesting is, as a filmmaker to have a subject who is also a documentary filmmaker and then over time the film became much more about activism itself and a kind of effects it has on people rather than being about forced eviction and land grabbing. So what motivated me was trying to understand what motivates these characters, these individuals themselves, and the things they do and the sacrifices they made to stand up against pretty corrupt government. And then you see these things happening, and over time, also it falls apart and the rivalry appears between two individuals in the group. And I just found it really fascinating, because it’s very universal thing what happens here, you have this group that becomes compromised when the personal fears of individuals, desires getting a way of overall direction of group. You know, it is something I thought was very relevant anywhere.

MOVIEMOVESME: Was there any fear of being in the place where you can get harmed? Because you were indeed in such intense environment.

Chris Kelly: NO, I don’t really feel any fear as a foreigner or as an outsider or journalist reporting in the country you have a quite degree of independence and you are not really harassed or bothered by the authorities. It is much more dangerous for Camara people there involved in protests or Camara journalists. But for me, no. There were no real danger. Although, there were something really stupid happened, when during the protest, I was standing two or three feet away from someone who was shot dead. And we were filming protest and not realizing that there were no kind of what we normally have a period of escalation when the protest escalates, the police or the army response supposed to be major. So if there a fire or a smoke, tear gas or a plastic bullets. But they just started firing directly towards the crowd right away. So there’s a danger in that sense. So you have be lucky, but there were never something targeted at me or at any other foreign journalist. We were able to remain partially independent and not to get involved directly in politics or what is really going on.

MOVIEMOVESME: You are a contributed to the Guardian Newspaper. You are also into undercover investigation. I wonder what is it that makes you to dedicate your life for such a great but dangerous cause?

Chris Kelly: I mean, I think it’s interesting work and very rewarding when you get to work with people that are willing to make sacrifices for you as well. The real danger was for people of Cambodia or Camara, or in the case of the Guardian investigation that was Camara-Barmese migrants that were working on a slave ships. I am really interested in exploring a human condition and what does it mean to be a human being and what motivates us more or what are or afraid of. That’s my motivation. I am skeptical really that to work that you do as a filmmaker will ever make a long-lasting change in this world. I don’t think the films can really change the world. Never in a way a filmmaker might hope. Everything happens in a cycle. It is a part of dynamic change over time. You can produce a piece work that can help direct a positive impact. But that can be easily erased over time. It is very hard to have an accumulative sense of moral progress. I don’t think that necessarily exists to me.

MOVIEMOVESME: You said an interesting thing that, the movie might not be able to change the world. But what I found interesting is that it might not be the film, but the characters you have in them are quite capable of changing that world. And one of them is Venerable Sovath. You have followed him for six years. Through his phone, he changes the perspective of the world and highlight its most crucial moments, especially the one we see in the movie.

Chris Kelly: Oh yes, he is a real hero. What he is doing really can and does make differences absolutely. Creating a very subjective and representing my experience of my time in Cambodia and people and experiences that I had. But he is someone who is really putting himself in danger all the time. He has multiple death threats. He is targeted by authorities. He is targeted by religious authorities. He himself has been forcibly evicted from his home in Pogoda for more than 20 years. He is not allowed to stay in any Pagoda or Cambodia because of his activity as a human rights defender. Because he always says, and one of the things that is very admirable that what he was doing was following Buddha’s precepts. Monk’s rule is not sitting quietly in Pogoda waiting for people to come in and put them in pray, their role is in society, commenting, providing a moral compass for the Buddhist believers in Cambodian society. So that is really what he is chosen to do. He never got actively involved in protests. He is always documenting them. Always maintained that distance. He never became an instigator, advocate or someone as an activist who does such thing. In that sense, he always had one step away from the protests, when there was a Cambodian Spring in 2013. It could have ended very differently. Had someone like him to became a leader of that opposition movement, rather than a person they had in opposition, who ultimately sold out. It could have been a very different outcome, because the monks traditionally have so much respect in the country, that’s why the hierarchy had been governed by government, to control. Because they are scared of monks due to the power they have and respect among the community. If they led the protest, that would have been completely different.

MOVIEMOVESME: There was an interesting relationship between Vanny and Toi, their rivalry and competition between each other.

Chris Kelly: They are very different. I saw that has been representative of all of these kind of protest movements when you have a community or group of people or friends, like things that motivates you that are often the same and brought together. They were often together by the shared desire to defend their homes and not to be forced play by divided government. And they were split apart by jelaisy and envy and fear. And maybe Toi took a deal from the government. Nobody really knows. Some might know but say nothing. She knows. But it has never been fully disclosed. But if Tod did get the deal, she never got anything, because she still lives in the poverty and in the same house. And from what I understood, Vanny spread rumors about her in the group. Because Vanny was scared. There was a power struggle among them. And that power struggle might came from outside influence. The outside influence wanted a simple narrative, a simple story. They wanted one person to be the face of the protest movement and they were kind of negating the reality and the complexity of what was really going on. There were so many people involved in that protest movement could not be simplified down to one individual. And the result of that simplification, because of jealousy and envy among the group, there are ended up splitting up. Even after that violence that happened, when I spoke with the group, they miss those old days, protesting together. It was really stressful and horrible and when you are beaten, they felt like they were not providing for their kids or they were not good mothers, both of them.

MOVIEMOVESME: How was it for you to watch how people’s houses get demolished?

Chris Kelly: Yes, it was terrible. It is awful to see people’s houses being demolished and torn to the ground for no good reason. The reason is greed. The government is doing good with developers to kick people out and to sell off the land. Basically, people’s houses are already so little any way. Toi and Vanny’s home is still there, they have never been demolished. But all other people within the group who lost their homes, most of their families that lived there have left, or forcibly evicted.  But neither of them, most of prominent activists, their homes never been demolished. But the ones that were, yeah, it’s terrible to see. Because people spend decades to earn enough money to buy a land legally. And that to be taken away without fair compensation is not pleasant at all. They say, they are not against development, they just want it to be fair and inclusive. They understand that they are living in an environment that’s a little chaotic. There has not been a formal settlement, or structure. Some legally owned it, some legally rented it.