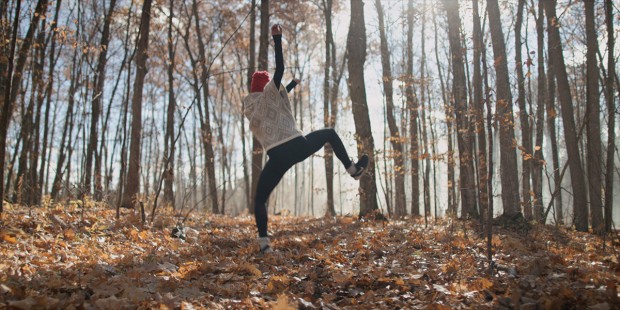 Films like “Latched” are always fun to watch. It’s almost like seeing a full length movie but in a short version where the conclusion is still the same. Having fantasy, horror and subtle humor combined in one, the film delivers a guilty pleasure, honestly saying, I did not expect to happen.

A choreographer who was introduced to us as Mother is a dedicated dancer who moves with her toddler to a rural cottage to find inspiration. As she continues breastfeeding him, the mother accidentally finds a strange creature in the woods that eventually grows big, scary and with one particular agenda.

When the film begins, we find the Mother with a little cute baby who is quite demanding. Every attention he seeks makes the woman to revisit her plans. What we learn though is that she got an invitation to attend a dance show called Latched, presented by Balsem Dance Theater. And that appears to be the reason why she needed to run away from the city to concentrate on her artistic side.

When she takes her child to the woods where she intended to rehearse, she finds a little creature, which looked more like a bat. But when she takes it home to throw it to the garbage, her milk that was manually pumped, accidentally breathes life into the creature who seems to have enjoyed the taste of milk that came from the mother’s breast.

Written by Justin Harding and co-directed by Justin Harding and Rob Brunner, this is an enjoyable piece of art loaded with an excellent soundtrack. The beautiful tune allows the story to become more dramatic and impactful. The performance delivered by Alana Elmer and Bowen Harding as the toddler were solid and believable. Overall, within sixteen minutes of running time, “Latched” made an outstanding job by reaching its aim. Its logical conclusion and its editing was of top level, no wonder why it was chosen to be premiered at Toronto’s International Film Festival.