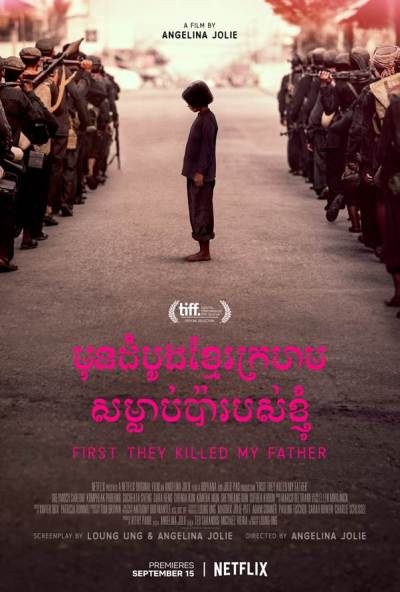 ‘In the Land of Blood and Honey’, ‘Unbroken’, animated film ‘The Breadwinner’ (produced only by Angelina Jolie) and ‘First They Killed My Father’ are movies that are about war; its implications, claimed lives, children that lost their childhood, families that lost their homes forever and yet about hope and that good will always prevail over evil. All abovementioned titles were directed and produced by Angelina Jolie, who developed, based on her latest feature film, her own signature style as a director, who always tries to bring back a universal problem such as war, to give it a voice, and perhaps to be discussed in a new manner. Yes, to remind us once again, we, as human beings messed up as a species overall…

‘First They Killed My Father’ follows Loung Ung’ s memoir based on Cambodia’s Khmer Rouge regime’s genocide between 1975 and 1979 that resulted in the death of millions of people. Loung Ung was fortunate enough to survive, however, through this film you will be able to experience the horror of war, murderous childhood, and what happens when mankind gets a chance to hold the gun in its hand. Powerfully co-written and adapted on the screen by Angelina Jolie, the film gives a frightening look in the past that seemingly has not changed much when you see the number of wars which occur around the world.

Every viewer must note one thing – this is not an easy film to watch. Angelina Jolie’s directing style grabs the audience and holds the entire film. At some point you won’t care about the storyline, but rather sit and watching, paralyzed and unable to move. In this film, you will find better, improved and different Angelina Jolie who tackles the main subject matter and delivers it in a subtle way.

At some point I stopped watching on the silver screen and concentrated, briefly though, on the faces of shocked audience that was somewhere deep in their mind trying to escape the nightmare Loung and all other children that appeared in the film had to face. And when that happens, you know, director’s first mission was accomplished. It got the deserved attention, while the film, and trust me on that, was able to deliver its own message one can hope those who create war will able to see to realize the damage they’re bringing to this world which cannot be fixed.

In conclusion, there is no easy way to watch ‘First They Killed My Father’ because it’s not just a random movie about war. This movie is about genocide, killings, destroyed lives and the hopes along with it. It’s about an opportunity to experience war in the first place without having been in a war zone physically. And luckily or not, ‘First They Killed My Father’ delivers that fully, with no gaps, or cheesy discussion, and takes the viewer right to the center of hell on Earth, created by people like you and me.