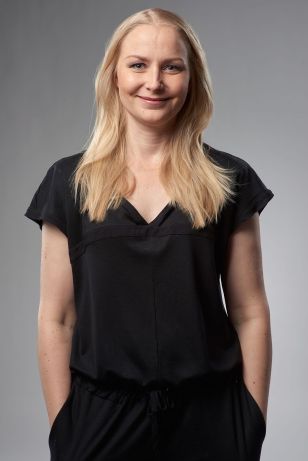 Did it ever happen to you that by the time you reach the end of the film you feel hopeless, exhausted, emotionally tired and heartbroken? It’s almost like the things you just witnessed happened to someone you cared about? MIAMI is a film you take personally. It evolves around two sisters whose lives have always been tragic, but in a very poetic way. This movie slowly builds up the hope not only for its protagonists, but for you as a spectator as well. All these will happen for one main reason – to leave you empty, confused but leaving you touched deeply by this aesthetically pleasing movie.

Having this kind of concept is never easy to tell in a movie, and more importantly, to keep the viewer engaged. During the Toronto International Film Festival, I was able to ask a co-writer and director of MIAMI Zaida Bergroth a few questions, I felt you, my dear reader, will be interested in.

MOVIEMOVESME: Well done! This is a really great film. I wonder where did the idea to make MIAMI came from?

Zaida Bergroth: Thank you! Really happy to hear your comment. The idea came 8-9 years ago. There was a string of scandals in Finland involving show dancers and various public figures (politicians, athletes). I was shocked by the very cruel public condemnation and ridicule these women were immediately subjected to. At the same time, there was something fascinating about these women, how fearless they seemed to be in their attention-seeking. So I became intrigued, and this became the basis for the character of Angela.

On the other hand I wanted to tell a story about sisters, so very soon the little sister Anna came along. Most of my films seem to deal with family relationships.

MOVIEMOVESME: Was there something you have discovered about Anna and Angela as you were writing them?

Zaida Bergroth: The script went through many phases. In the beginning it was more comic and satirical. Later, it really clicked when screenwriter Jan Forsström and me decided to make it more of a drama, and add the crime element, which gave us the possibility to lead it to a very dramatic and emotional ending, which somehow does justice to the larger-than-life quality of Angela.

As a character, Angela was sort of there from the beginning, but along the way she did become more vulnerable and human, but without losing the element of mystery surrounding her.

With Anna, the process was much longer and also harder. I knew she needed to be a shy small-town girl, but it was a surprising and fun turn, also for us writers, when she turned out to have skills which almost make her a criminal mastermind as well. Casting Sonja Kuittinen also influenced the role, and I think I only really knew that it worked when I saw her doing it.

MOVIEMOVESME: As someone who has a sister who I’m very close to, I could connect with Anna or even Angela, who was very troubled but very charismatic person. I wonder if you could talk about deciding the path or even prospective future for both?

Zaida Bergroth: From the outset, we knew that Angela would not really change in the film: we see different sides of her, but she is who she is, both in the good and the bad. It was a tricky balance, to show how irresponsible and dangerous she can be, but still keep her sympathetic. We did have different endings, but the one we chose hopefully is one which does not avoid the moral dilemmas in the film, but still lets Angela keep her mystery.

Anna is the one who grows. She gains a lot of self-confidence through Angela, but also learns to take responsibility. In a way, she becomes who she was meant to be. In the end, she has still something of Angela in her, but she has also become an adult.

I guess the core of the film to me really is in the relationship between the sisters. Not in an prettified way, there is also jealousy and manipulation there. But there is also unconditional love, something which goes beyond our self-interest. I have three sisters myself.

MOVIEMOVESME: The casting of MIAMI is amazing. Both Krista Kosonen and Sonja Kuittinen were brilliant. Can you talk about your search to find perfect actors that were willing to throw themselves into the insane world of MIAMI?

Zaida Bergroth: Krista is a major film star in Finland. I knew she is a brilliant actor, and I really wanted her because she had the necessary charisma for the role. It clicked immediately.

For the role of Anna, we had a longer casting process. I had taught Sonja at the Theatre academy in Helsinki and found her really talented, so I think I told her that she should attend the open casting call. After some casting rounds, it was apparent that she was the right choice. It was her first film role, and obviously it is a really difficult one, as the character goes through quite an arch. Of course it was also important that they make a good pair with Krista. I think the three of us really trusted each other, which gave them the necessary freedom to be as wonderful as they in the end are.

MOVIEMOVESME: It would be great to learn about the soundtrack of the film. Every tune had its meaning, like if they had their own story to tell.

Zaida Bergroth: The screenwriter Jan Forsström is also the music supervisor, he has chosen the music for all my films. In this case we decided not to have a composer, but to use only existing music (apart from 2-3 tiny bits of music which some composer friends did for us at the editing stage). This allowed us to integrate the music in the story already in the script phase. So yes, it is very much part of the dramaturgy.

Sort of a theme song for us was Samantha Fox’s The Best Is Yet to Come, which Jan played to me already years ago when we started talking about the film. Samantha Fox is someone Angela would probably have admired and even the words fit perfectly: it’s a love song, but so innocent that it works for a story about sisters too, and it’s about expectations, and not caring about the rest of the world. And what’s more, it’s written by a Finn! Andy McCoy from the group Hanoi Rocks.

The other songs follow the same aesthetics, 80’s influenced, really romantic and glittering, so reflecting Angela’s world. Three songs are by the Swedish group Niki & The Dove, who even had a song called Miami Beach. Suicide’s Dream Baby Dream (in a very soft version by the Swedish singer El Perro del Mar) works as a recurring theme. For the really dramatic moments, we used some modern classical (by Alfred Schnittke and Anna Thorvaldsdottir).

Part of the credit goes also to our editor Samu Heikkilä, who was brilliant in the way he used the chosen music for each scene, and also came up with some things we had not thought about, such as using the Samantha Fox song again in a surprising way in the middle of the film.

MOVIEMOVESME: Is there any scene from MIAMI you felt was very important to be told?

Zaida Bergroth: Maybe the scene before the first dance the sisters do together. Anna is nervous and stage struck, so Angela helps her by making her imagine the place is a casino in Miami, and how they are dancing for each other. It’s about the importance of someone looking at you and really accepting you, and the power this can give you. I guess this is the essence of Angela’s magic.

It’s also a key scene in another sense: in making a film about show dancers it’s of course tricky that it does not become voyeristic or titillating in the wrong, male-gaze way. In this scene I think it becomes apparent that we are looking at the sisters differently, in their own terms.

MOVIEMOVESME: MIAMI as a title is very interesting and mysterious. I know it’s been explained in the movie. But as a writer and a filmmaker, it would be great if you could give us your way of seeing MIAMI the way we might have missed.

Zaida Bergroth: It’s a glittering dream world, and something very far away from Finland… And for the spectator, there’s probably already a doubt that the real Miami might not be like the Miami of our dreams. But at the same time it’s not really a tragic, sad dream, since the plastic image of Miami, with the sun and the palm trees, is also a bit funny, at least to me. And it’s a catchy title!