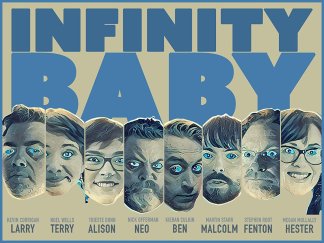 Indie movies always deserve our attention – no matter whether they are good or bad. Frankly speaking, if we don’t see a film, how shall we have a chance to know whether it was worth our time or not? I did anticipate quite a lot and was very excited to watch the film “Infinity Baby” directed by Bob Byington. However, after watching the first two minutes of it, I realized what a great mistake it was to decide to see it in the first place. Still, I believe every movie must be seen until the end – good or bad. Thus, I had no choice, but to honor my own rule with dignity and respect. No matter how painful it was, this movie – as any other – had its right to demand this time from me as a viewer. That was the least I could do.

“Infinity Baby” takes the viewer to not distant future, where medicated infants do not age. But it is also about grown-up people – mainly men, who also forgot to grow up, remaining infants in their minds in their own strange way. Ben meets Alison, who falls for him. She starts dreaming about having babies, while he, in his creative mind, thinks how to get rid of her through a hired woman who must pretend to be Ben’s mom.

I guess it’s safer not to reveal what happens next in “Infinity Baby”. It is up to you to watch and learn it. If you decide to go for it, please, be prepared to watch a comedy which is not so funny. I did not find anything amusing about the storyline. Some lines, though, were written with taste, and I must admit, it was a pleasant surprise.

In the end, it won’t be fair to decide whether to watch this film or not based on my negative review. Often, times proves us – the film critics, wrong. At times, what we do not like is accepted and loved by the wide audience. Maybe that will be the case with Byington’s film. I do hope so. But until you see it, there is no way for me to find that out. And of course, consider yourself warned about the quality of the film. Nobody should be held responsible for anything that happens afterward. Except for the babies, of course – the infinite ones!