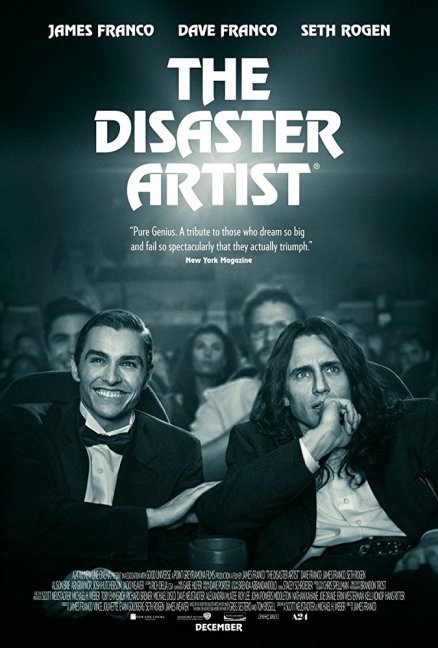 If you’ve read some of my previous reviews, you may know that James Franco is not among my favorite actors. In fact, he is on the list of talents not to watch under any circumstances. However, the trailer of “The Disaster Artist” was so appealing to me, that it immediately became one of the most anticipated films – like one of those anticipated dishes that one should try before dying. Sounds too good to be true, right? But I am glad that with this movie Mr. Franco has proven me wrong. He showed what a versatile and innovative actor he is – a creative thinker and risk-taker. He has not only recreated what always seemed impossible but also directed it. If you are thinking what movie to watch tonight or tomorrow,  waste no more time.  I will sound persistent, but if there is one movie you must watch before the day ends, that should be “The Disaster Artist”.

The story begins with Greg and Tommy meeting each other during acting classes. None of them is great, to say the least. Both men want to showcase their acting abilities, yet there’s not much to show. Finding a perfect match in each other, the two begin the most unlikely friendship and embark themselves into an unimaginable and embarrassing journey which turns to be the harshest test they both need to survive. When they finally admit the fact that Hollywood does not want them, they decide to make a movie together. Of course, this turns out to be the worst movie ever made.  Still, despite being so awful, “The Room” is one of its kind and manages to attract the audience.

But who is Tommy? We know nothing about him – his age, where and how he got his money. Everything around him is a mystery and Greg is not allowed to ask any questions about his unique persona. Greg honors this request but at some point, he is unable to resist asking questions. Frankly speaking, it is surprising to see Greg not doing otherwise. It is also surprising that Greg agrees to make a movie after seeing how awful the script is, and he still remains a respectful friend to Tommy with all ups and downs.

“The Disaster Artist” is one of the most hilarious and brilliant movies ever made. That becomes obvious as soon as you see James Franco fully transformed into Tommy Wiseau. The performance he delivers is an instant classic. Every scene is a guilty pleasure to watch. It’s wicked, smart and a great tribute to the actual cast and Tommy Wiseau – the director of the original movie “The Room”. Having those original scenes from “The Room” recreated with superb accuracy, makes me wonder why he had to wait so long to show the behind scenes of the most interesting, horrible, and yet, the crowd-pleasing movie ever made.

In conclusion, “The Disaster Artist” is one of those films that have absolutely no downtime for the audience to get bored. The screenplay is amazing and describes everything in such detail, that the actors have no problem to perform. Dave Franco, Seth Rogen, and Alison Brie felt comfortable in shoes of the characters they portrayed. Even the appearance of Sharon Stone in a cameo role made Franco’s movie even more interesting to watch. And James Franco – what an outstanding job he got done! Directing in the film is top class! The performance of the cast is iconic, and his facial expression is something that will make me go back and watch it all over again because it is pure, fabulous and astonishing performance, I personally will always admire.