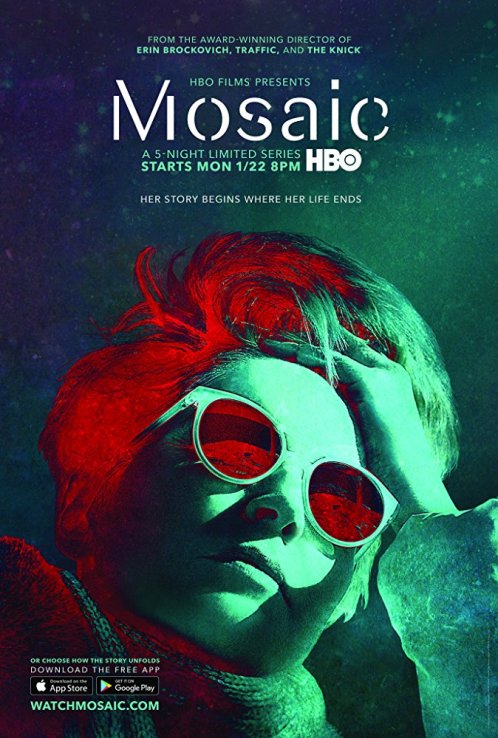 Watching crime movies or TV shows, one often gets that strange sense of vulnerability. We often find ourselves helpless in solving the puzzles offered in those films. And when such a crime is committed against a local celebrity, who has enough people wishing her death, it is quite complicated to even attempt to solve the mystery of who might have done it. Brought to us by the writer Ed Solomon and critically acclaimed director Steven Soderbergh, “Mosaic” is the new crime story that feels like real. From start to end, every person appears as a person of interest. Except one – Olivia Lake, the woman who is killed.

It starts with Joel Hurley (Garrett Hedlund)- the local enthusiastic but unaccomplished artist. We first meet Joel standing outside his hotel room in front of his friend who happens to be a detective named Nate Henry (Devin Ratray). Nate is being very gentle, as he tries to explain what Joel must expect when he visits the Judge the next day. Then, we are taken four years back.

Olivia Lake (Sharon Stone) is a famous writer whose children books have influenced and even changed many lives. Now she resides in Summit, Utah where she owns a large piece of land to which she is attached emotionally. She throws parties to collect money for charity, but other than that, she does not have any permanent companion at home except her dogs and cats. Things change when Joel appears in her life. Olivia hopes their relationship will advance to a new level. Sadly, she does not manage to achieve that with Joel. Instead, Eric Neil  manages to compensate for what she has missed with Joel. Firstly, Eric’s plans are not so genuine, but later he falls for her.

To keep the story short, I shall skip some details jump to the moment when after several heated arguments, Olivia Lake is found dead. Eric Neill is sent to prison. Although he is the main suspect, we are not sure whether it has been him or someone else has committed the crime. Four years later, his sister is back to Summit to conduct her own investigation along with Nate Henry –  a man with dignity and respect for justice. He strongly believes that justice must be served. As the two of them begin their investigation, they will come to the realization that the truth is out there, just buried quite efficiently and must be uncovered. How to do that when Olivia’s body – the crucial piece of the puzzle is also missing?

The entire show is an utter masterpiece. Still, two characters will steal your hearts throughout the series – Nate Henry and Petra Neill. Jennifer Ferrin as Petra is superb. The way she portrays Eric’s determined sister will give you chills. Her facial expressions show more than any lie detecting device. Devin Ratray, as Detective Nate Henry, will help us restore our faith in the system of justice. Sharon Stone’s Olivia Lance is the engine that keeps fuelling the story. Her appearance in any film makes it a worthy piece in the best sense of it.

In conclusion, “Mosaic” is surprisingly captivating crime thriller. Any viewer who has tons of patience will be rewarded with an awesome experience in the end.  The show offers a lot to think about. It delivers a very slow-paced concept which works well for the story. If done otherwise, it might’ve failed to reach its effect. The script written by Ed Solomon proves that there are still great minds out there if we are still getting pieces like “Mosaic”.

Last but not least, it is worth mentioning that this was initially released as an interactive app, where the user could experience different parts of the story from the perspectives of different characters, and later turned into a show.