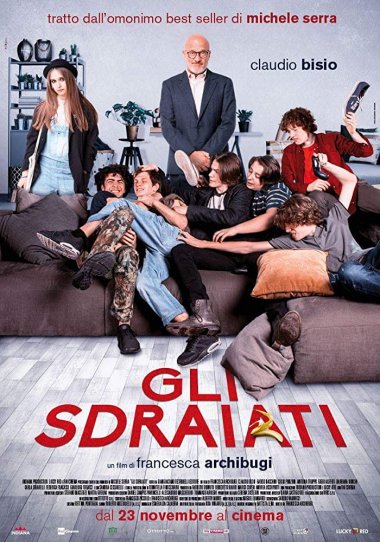 We often see movies about the mother-and-son relationship, but how many movies out there actually capture a father’s vulnerability the same way it does of a mother? In “Couch Potatoes” or “Gli Sdraiati”  (original title), we find Giorgio, a caring father who has a fancy job as the host of the TV show, “Letter to Italy”. As he tries to find solutions for others, at home and outside of his work, he is the same as everyone else with common problems he faces with his teenage son, Tito, who’s extremely impatient towards his parent.

“Couch Potatoes” begins with Giorgio who is constantly in an argument with Tito – he is always worried about his son not following the rules of the house. He never cleans, leaves his half-eaten yoghurt on the couch, never knows where his socks are, cycles with his friends around the city with no helmet on and allows his friend to call his father a loser. But that’s just the tip of the iceberg that only begins to escalate and vents emotionally in a very unpredictable way. However, no matter what, Giorgio remains cool and emotionally intact until he manages to find the right language to use with his seemingly uncontrollable son.

Even though it seems like Tito is just an ungrateful son, he never appears that way if the viewer put himself into his shoes. Indeed, what he does to his father – yelling or his disrespectful gestures towards him are never meant in a bad way. At some point, he will explain why he does not want to be babysitted or bugged by things like putting things at home in the right place.

In conclusion, Based on Michela Serra’s book, the script co-written by Francesco Piccolo, directed by Francesca Archibugi, starring Claudio Bisio as Giorgio and Gaddo Bacchini as Tito, “Couch Potatoes” ends up as another decent family drama presented by RAI Cinema of Italia. It cleverly captures Giorgio’s struggle, never shies away from emphasising a father’s fears and how it sometimes can be like a scrambled egg because of his son who he loves so much. Tito, on the other hand is vulnerable as well, but tries to hide it due to his own reasons. But no matter how difficult he tried to be, he never stops loving his father which is something you all will, I hope, notice as well.