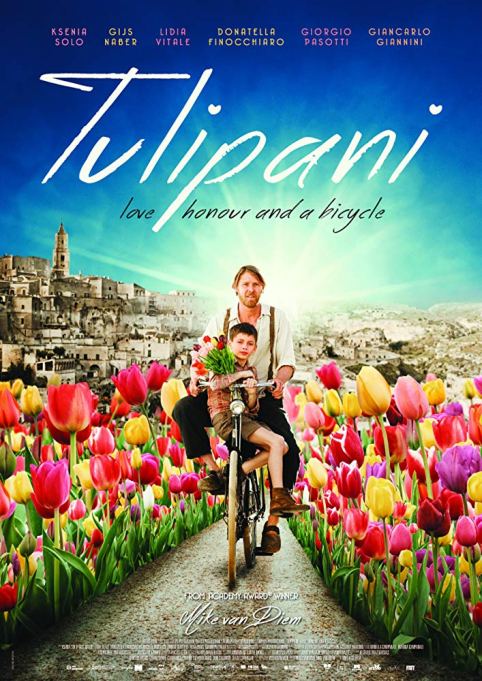 Any movie holds that unique power of taking over our mood or bore us to death throughout. But having that positive or negative impact on any of us is already an excellent sign meaning – it worked, even though, it may not be in the way it would or not expect. In Mike van Diem’s “Tulipani: Love, Honour and a Bicycle”, there’s nothing in between, you either like it or love it, but never anything other than that because it uses the universal tool – love that never dies.

The film follows Anna (Ksenia Solo) who, to fulfil her mother’s dying wish, travels to a little town, Puglia, in Italy from Montreal, but instead finds herself widely recognized in a little town through her father Gauke (Gijs Nabre) that leads her to learn a fascinating love story that started with growing tulips.

“Tulipani: Love, Honour and a Bicycle”  begins with an 18 year old Anna on her way to a hospital in Montreal where her gravely sick mother Chiara is waiting for her to tell two things: to begin thinking of her life and carry her ashes to Puglia. Anna decides to commit to her mom’s last wish and in Puglia, as soon as she arrives, she realizes that many people already know her from when she was little, and in fact, her father as well. And with flashbacks, the entire story is told to an Italian police inspector (Giancarlo Giannini) who tries to make a decision in a recent murder case and Anna seems to have the final word on it.

As we travel back in time, we find Gauke who, after loosing his farm during the floods of 1953, is determined to never ever have wet socks again. So he decides to cycle to the hot south of Italy to start a brand new life, which he does with discovering a love for growing tulips, and gaining enemies that will define his future and everyone else as well as those whose life even slightly crossed with his…

In conclusion, Mike van Diem’s film is a remarkable reminder to the picky viewers why we must and always remember the value of good cinema, excellent storytelling and the beauty of being in love with something that can be felt deep in the heart, the same way you will feel towards Diem’s piece, which is a genuinely heartwarming love story made with great care for attentive and appreciative viewers like yourself.