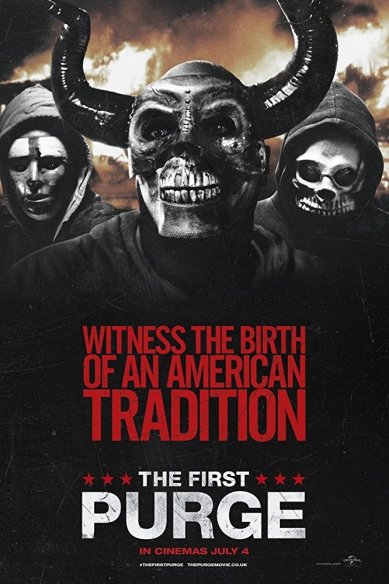 Ever since “The Purge” franchise hit the silver screens, I’ve had only one question which I hope someone will be able to answer – why do we let people kill each other and let them get away with it afterwards? After following all the installments of “The Purge” it started making more sense why the government so eagerly wanted to get rid of poor people in such a vicious way. But it was the prequel called “The First Purge” that finally brought to me logical closure where I realized that being poor is apparently a crime for wealthy corporations who create an experiment called the purge to remove poverty by the means of ‘helping people to release their anger’, resulting in depopulation and saving money.

Set in a dystopian America, we find the country in a very poor condition; unemployment rates are higher than ever, stock markets are going down, there are no jobs or money. People are angry and look for ways to release their anger. The NFFA comes up with a new experiment called “the purge” which is quickly legalized, widely supported by the President of the United States and funded by the NRA (National Rifle Association) who gladly provide guns if necessary. The experiment takes place at Staten Island where mostly the poor are participating.

The NFFA offers a five thousands-dollar reward to anyone who agrees to stay in the island and compensate even more if the participants agree to participate actively, in other words, kill or to call it fancily – purge. But when the night starts and not a lot of killings happen, the NFFA quickly becomes frustrated and takes the matter in their own hands, not realizing that they might face heavy resistance coming from the same people they hoped to get rid of for good.

It’s 2014 and after realizing that people need an opportunity to release their anger, the NFFA tries a sociological experiment to find out what people would do if they had that chance. This is when we find Nya (Lex Scott Davis) and her brother Isaiah (Joivan Wade) in the middle of a neighborhood that clearly qualifies to be the first one that can be purged in the eye of the NFFA. Dmitri (Y’Lan Noel) is Nya’s ex-boyfriend who still deeply cares about her. Realizing that he won’t be able to leave the area due to the large sum he possesses, he decides to stay at the Island during the experimental night, but is heavily armed just to make sure he is safe from his enemies.

The honor must be given to Marisa Tomei who portrays Dr. May Updale as the Architect of the entire experiment, who will surely be remembered as a hero for the rich and villain for the poor. However, as soon as the experimental night commences of the very first purge, the first killing happens, and then guess what? It is only party, party and party across the island, leaving the NFFA puzzled with only one question in mind – why is nobody killing anyone? But all of a sudden, the number of murders committed become increasingly high by people who seemingly should not have been on the island in the first place.

“The First Purge” written by James DeMonaco (who for the first time did not act as a director) and directed by Gerard McMurray is the only film that scared the hell out of me due to it being relevant, real and something that I expect can happen any time in real life. DeMonaco in his piece brings out the reflection of the society in the United States, especially now, that is pretty much owned by the NRA and successfully being trolled in the fourth installment which depicts the origins of the first annual “Purge”, where it showcased how for a 12-hour period all crime in America was made legal.

“The First Purge” is as great as its predecessors. It still has that courage to speak about issues like depopulation, saving money by killing poor people, legalizing crime not only committed by desperate people, but by the government themselves as well. In this film it’s clear that while the sociological experiment had perhaps some good intentions, it soon turns into a massive tool to manipulate the violent environment controlled by those who have more guns, money and protection.

Just to conclude, as someone who’s never missed any part of “The Purge” franchise, it’s an absolutely satisfying piece that’s not afraid to reveal the truth about ourselves. Indeed, having guns in the house is almost like giving permission to someone to shoot anyone who stands in their backyard no questions asked and get away with it. Because there is a law such as self-defence or protection of one’s own territory.

In the end, what we see in “The First Purge” is the dark part of the world that is right there waiting for its moment to see the light, a moment I truly hope we get to live only through our silver screens. Because if something like this happens, and I believe it may, then God Bless all of us. Because no matter how fast we may run, hatred, jealousy and bullets reach their target much faster than any of us can reach our shelters from the madness, if we are lucky enough, to leave behind.