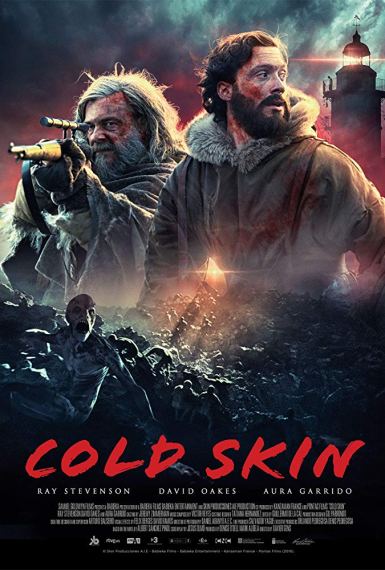 It does not happen very often that a film builds a very profound connection with a beast, animal or anything that can terrify human beings in a deeply moving way. “Cold Skin” delivers almost a Jules Vern-esque atmosphere with visually stunning effects that’s dark and colorful, creepy and frightening. But more importantly, it’s the story of fish-people that treat humans the same way humans treat them – violently, until the moment everything changes to the point where love and mutual respect becomes strangely important on the horizon of the island where hope left a long time ago…

When the film opens with Friedrich Nietzsche’s quote saying, “Whoever fights monsters should see to it that in the process he does not become a monster. And if you gaze long enough into an abyss, the abyss will gaze back at you.” It makes complete sense what you’re about to see is not a common relationship between two human beings but rather two beings stuck on the island for two different reasons to learn, perhaps, their true nature through the battle they find themselves in with the fish-people that seem too violent to get along with.

Immediately after we’re introduced to a young man named Friend (David Oakes) who recognizes the captain of the boat saying, “the captain would treat me with the courtesy of an executioner.” Well, the same captain asks our protagonist Friend again whether he will be able to manage his twelve months’ duty as a weather specialist. In the island he meets a crazy and out-of-the-world madman named Gruner who right away tells the young man the beauty of this place should not blindside him as it has more to offer than what it seems, and that something is not pleasant at all.

Of course, Friend stays in the island hoping his next twelve months will be fruitful, but his first night in his new place proves him wrong as he begins his battle with unknown creatures, later to learn they are the fish-people. We don’t know why the fish-people keep attacking the island or the reason why they are so unfriendly towards Gruner or even the island’s new inhabitant, but an enslaved fish-girl makes Friend wonder about its nature, and begins falling for her humanely. The relationship they develop makes Gruner envious which eventually escalates to the point when the same dangerous creatures that terrify the two men at night become much kinder than human beings.

Cinematography in “Cold Skin” is truly beautiful. Visually, the film manages to transport the viewer back to the beginning of the 20th century and gives that glimpse of Aneris, the name of the fish-girl and why Friend finds her so fascinating. Overall, the film provides an enjoyable ride where the main concept is the psychological test of two men to see how both of them handle their fears, helplessness and its implications which obviously won’t be the same.