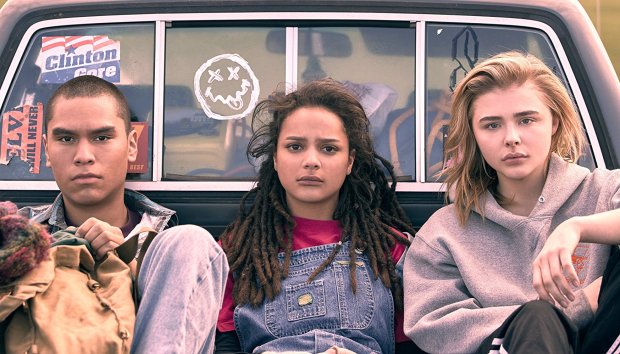 There are so many serious problems in our world that we encounter day after day. To name a few, there is poverty, children dying of hunger, wars that go on for so long that we have become numb and almost feel comfortable with them. This list can go on. Yet, instead of trying to solve all of this, people concentrate on such issues as someone’s sexual preferences. And I do apologize for being too sensitive but that’s how I felt after watching “The Miseducation of Cameron Post”. I believe there is no other way to react to this.

Cameron Post is a teenage girl. Although young, she is old enough to start exploring and discovering her homosexuality. At the prom night, she is caught with her best friend – the Prom Queen. Immediately, Cameron is sent to a gay conversion therapy camp, which is called “The God’s Promise”. In that camp, Cameron makes new friends, tries to understand what she is being told about her same-sex attraction. At the same time, she realizes that all of this is just miseducation, forcing her to be someone she will never be.

Cameron’s parents have died in a car accident and her aunt – Dr. Lydia Marsh (Jennifer Ehle) is her legal guardian. She is who forces Cameron into this facility. Aunt Lydia is a very uncompromising, tough and deeply religious person. Her lines are too painful for an ear to hear. What she says to Cameron, or even just the way she speaks and comparisons she makes about gay and lesbian people, sounds so ugly that it can send anyone into depression.

The film is based on the debut novel Emily M. Danforth and is directed by Desiree Akhavan. Cloe Grace Moretz is starring as the lead. Surprisingly, the film turns into an uncomfortable journey. The characters are well written – lively, humane and gentle, except Jennifer Ehle’s Dr. Lydia Marsh, of course, who can claim an award for being the pure evil of the year.

In conclusion, “The Miseducation of Cameron Post” is a well-narrated drama that talks about the young generation being misunderstood by the society, who labels them as a sinner for their same-sex interest. It captures how kids are being sent away from their home for not being who their parents expect them to be. It is those parents, actually, who need to look deeper into what is happening with their children and provide them with the necessary support. But, based on what we see in this film, this progress in society is too slow and may never happen until what is described in “The Miseducation of Cameron Post” is stop and prevented.