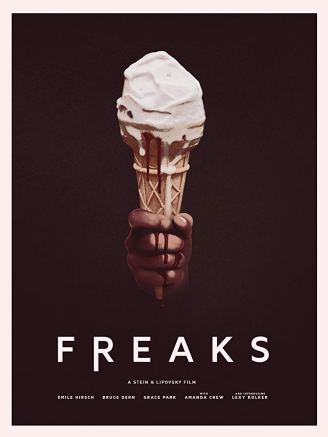 Watching “Freaks” at the Toronto International Film Festival was a last-minute decision. And I could not be happier for having done that, because surprisingly, directed by Zach Lipovsky and Adam B. Stein, this indie horror-drama appears to be one of the best I’ve recently seen.

The concept is quite amazing if not one of the best. Chloe and her father have locked up themselves inside. In fact, she has never seen daylight as her father is sure if they do, they might get killed by very bad people. At first, we don’t really believe him, as at some point, when Chloe disobeys his order and looks outside, everything appears so peaceful, beautiful and quiet. The girl begins asking herself what are the real reasons that made her father to keep her as a prisoner inside the house.

Of course, it is not like Chloe was one. Her dad takes good care of her. Even though she is too little to understand that, after meeting an elderly man who sells ice cream outside on the streets, Chloe will finally start seeing the true reasons of her captivity and her father doing everything possible to not have them both killed by the police.

“Freaks” is an excellent fast-paced horror movie that, pretty much, focuses on all sorts of paranoia until details starts to emerge. While the entire cast along with Emile Hirsch do not disappoint, it’s Lexy Kolker’s amazing performance that will amaze you. The little actress got a challenging part, but manages just fine to, hopefully, become one of the best of her generation some day.