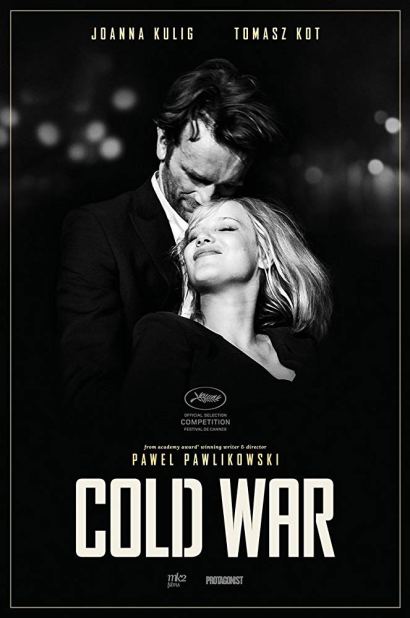 What do colors bring to us? Why is it so important for the newer generation, especially the one that considers itself progressive, to prefer watching movies like “Avengers” that gets a wider release compared to the ones filmed in black-and-white? It appears to be less popular and as a result get a poor, limited release only to be seen by those who manage to see the true colors from the same blunt black and white…

“Cold War”, written and directed by Pawel Pawlikowski, is an absolutely charming piece that explores the theme of passionate love between two individuals whose feelings for each other will have to circumvent the shattering war, communism, geographical distance, and of course years of time as well. It follows an artist from Poland, Wictor, widely known in the artistic circle, and Zulu, an ordinary girl from a troubled family who has a suspended conviction.

Wiktor questions Zulu why did she knife her father to which the young woman replies, “because he misunderstood me with my mother, and the knife was the only way to show the difference.” But it was not that answer that made Wiktor fall for Zulu so hopelessly, but her way of feeling the heart through the songs she performed. Whether it’s her rebellious attitude, charm, uncompromising nature, or just his determination of seeing her as the love of his life, the actual war may have had an impact on Wiktor and Zulu but their feeling and passion towards each other never slows down its magnificent pace, while you my dear reader, enjoy every moment of it through astounding cinematography and colors that will never fail any of us – black and white.