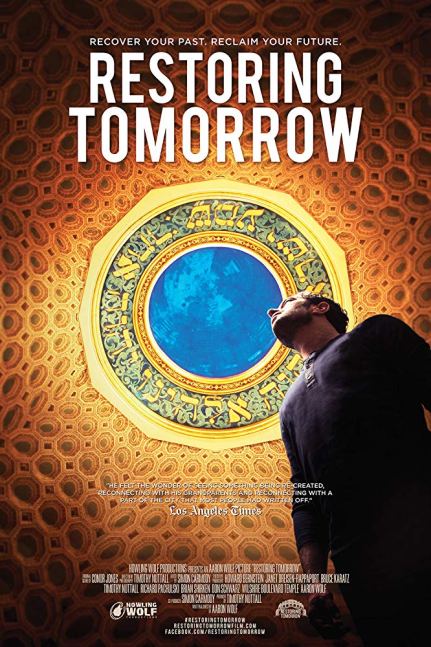 Life is getting busier every day. Our views, our perspectives keep changing while some challenges turn into an impossible task. If we are unable to look after our own needs sometimes, how can we look after something we may have forgotten to take care of? For instance, praying from time to time, or going to temple or church? But here’s the surprise; what if one of those churches or temples has been closed and we had no idea about it?

“Restoring Tomorrow” is a documentary that tries to prevent such an unpleasant realization. Filmmaker Aaron Wolf, with his personal journey, experience and an emotional touch, embarks on a journey to save LA’s Wilshire Temple once built by a Hollywood Mogul. But Wilshire Boulevard is not important for the Jewish community only, but it’s about its connection with people, the past and its importance in the future.

As the film attempts to connect with religion or restore our fate and begin cherishing the past that not only has disappeared from our daily life, but seems to have no place in our future, Aaron Wolf, by conducting interviews with documentary subjects, conveys the most important message – the look of any historical building can be restored to bring it back to its known glory, but without our support none of this can be done. Ever.

Wilshire Temple in Los Angeles is a stunningly beautiful piece of architecture that requires generous support of people to begin the restoration process. But, while money might be the biggest concern, Wolf’s fear is essential here and even his plea, in which he does his best to explain through his film why we should never give up on the past, have the right balance between yesterday, today and tomorrow, and what we want to leave behind. Legacy is everything. That’s why the life of Wilshire Temple is a turning point in not only Wolf’s life but everyone else who has spent even a day at that glorious temple.

Also, the film projects an astounding number of Americans who’ll be without religious affiliation by 2050. Indeed, the times we live right now is quite harsh, and the fact that temples or churches close their doors is even more alarming. But Wolf as a writer and director finds the right route to show how future can be restored by treasuring what’s been in the past. Temples, Churches, Mosques are places of unity, hope and faith we might lose if we let the same places to get closed due to lack of time or appreciation.

In conclusion, “Restoring Tomorrow” is an important piece for education and a provides great food for our soul. It’s energizing and well crafted, even though it has controversial facts included that might lead one country to argue about. But leaving political inaccuracy aside, Aaron Wolf’s “Restoring Tomorrow” is a worthwhile documentary film about why history should never be erased, because without it there is no future.