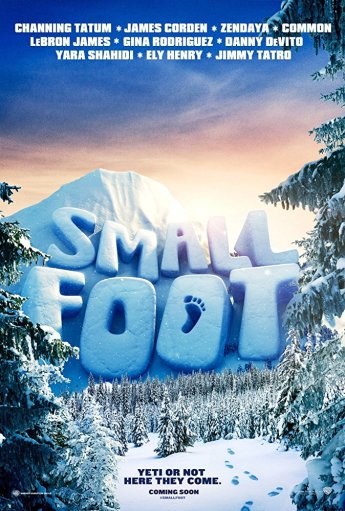 You can call me very sentimental, but there’s something poetic and romantic about Karey Kirkpatrick and Jason Reiisig’s “Smallfoot.” Based on the book by Sergio Pablos called “Yeti Tracks”, it touches upon a long-awaited concept where it has one simple message to deliver – “we must not be afraid of each other.” It’s the most timely made animated film that must be seen not only by little children but by adults as well, some of whom have forgotten the virtue of goodness, unity and kindness towards every human being. It reminds us that this place we live in must be shared by everyone, and by everyone I mean even horrific creatures we’re so afraid of, but realizing they’re perhaps terrified of us too.

A yeti with a friendly name, Migo (Channing Tatum), missing an ‘A’ in the beginning of his name, had a chance to meet a human named Percy. Convinced that he is the creature knows as “Small Foot”, he embarks himself on the journey to prove his finding after failing to convince his tribe. Help comes from Meechee (Zendaya) and the S.E.S – Smallfoot Evidentiary Society. But by doing that, the team had no idea the knowledge they’re trying to share might be much more damaging than they can imagine.

There are always other lives existing apart from ours. But was it done for the sake to protect us ordinary people? I do not really know. Migo already realized he’s a bit different. He is kind, gentle and extremely curious. Also, he has no intention of giving up when he knows he is right. Indeed, the human he meets in the face of Percy is true. But what he does not know is why that truth was never meant to see the daylight. In the beginning, he faces a challenge with the Stonekeeper (Common) who is too powerful in his denial saying, humans or “Small foot do not exist.” By that time, the viewer can imagine that the keeper of the stone knows much more than he tells, but can we blame him for doing that?

Percy is a whole different story. He lacks honesty, integrity and would do anything to boost up the rating of his fading tv show. When he survives a one-on-one meeting with Yeti, he is determined to find proof and hopes his colleague, Brenda (Yara Shahidi) helps him with that. What the man does not know is that Yeti Migo has the same mission. But when the two meet again, the disaster is inevitable. Surprises will come one after another, the biggest revelation being why humans and yetis have tried to stay away from each other for ages.

I wish there was some truth in what has been told in “Smallfoot”. It’s so hopeful that it would make any nostalgic person cry. But hey, there’s one line that we all must think about when the Stonekeeper tells Migo, “Do you think knowledge is power? The question is, what are you gonna do with this power?” The same power has been misunderstood and misused so many times. But “Smallfoot” somehow manages to explain it in such a way that none of us will ever question it again.

In conclusion, a perfect cast and an exceptional storytelling turns “Smallfoot” into a profound animated feature with a strong message. An outstanding soundtrack, especially the one performed by Common (The Stonekeepr) called “Let it Lie” is worth listening to a million times. A part of the lyrics says, ‘Man, or human, they showed us human nature. A dangerous species that we approached with wonder. They attacked with spears and their smoking sticks of thunder. They called us Sasquatch, they called us abominable. We had no choice but to run and hide, otherwise, we surmised we were facin’ genocide.’ This is the perfect example of why even the biggest of creatures are quite afraid of us.

Lastly, of course, Migo will get his chance to show the world why we must not be afraid of each other. But before getting that far, he is set to outcome his own struggle of truth and fear and conquer them like a hero. So, don’t miss your chance to experience a forbidden truth, the generosity, unconditional sacrifice for the sake of the future, for the sake of humanity that will be made by the creature we would run away from if we could. But should we and why? It’s not that simple to answer. But “Small foot” somehow does.