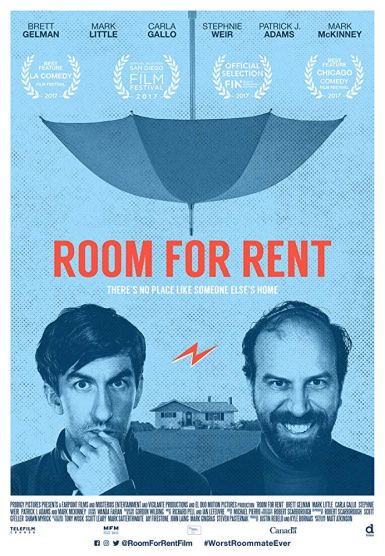 It is true that money is the best driver ever for its ability to drive people nuts over it. And once you become a passenger of it without fastening your seatbelts, trust me, the result cannot be any worse than the one explored in “Room for Rent”. Because having desperate days is one thing, but having bad luck is a whole different story.

Mitch (Mark Little) won a lottery when he was in high school. The sum was three million and half with an equal number of opportunities he could have taken advantage of. And he did, as he thought, but after some time he ruins not only his life but the life of his parents, splits up with his girlfriend, Lindsay (Carla Gallo) and has no savings at all. Realizing that there must be something done to ease the toxic situation in the house, Mitch decides to rent the room. Sounds easy. But the stranger (Brett Gelman) who knocks at the door does not appear trustworthy, but his money brings lots of confidence to Mitch and his parents. But only for a while until they learn who he really is…

Since Mitch is broke, he has nothing else to do in life. He sits at home, eats his parents’ food, occupies the space that could have been used more productively and he does not even look for a job, because his mind is too busy in a search of a new idea, but previous experiences promise nothing positive at all. His father, Warren (Mark Atkinson), just announced his retirement, his mother, Betty (Stephanie Weir), is a housewife. And now, they decide to sell the house because they desperately need money, thanks to Mitch.

But the appearance of Carl overnight changes the life of the entire family. He agrees to pay a thousand dollars monthly for renting a room, and on top of that, pays for the last month as well. He seems to have lots of money, the course of it we’re yet to find out. Betty and Warren did not like the idea of renting a room to a stranger, but the smell of money did its job and they were hooked completely. Mitch, otherwise, has already passed the stage where he had too much of it and that’s why was able to notice that Carl is way too nice, extremely polite, generous and giving. While these qualities are something we should laud everyone for having, in this dark comedy all these will take a different form, which is quite honestly, entertaining and absorbing.

Written and directed by Matthew Atkinson, “Room for Rent” is a delightful movie that runs three, if I can say it that way, separate stories evolving around winning a lottery, the implication of it, and why it’s always wise to run a background check before letting someone into the house. Atkinson’s movie has six very interesting characters we will know enough about to draw our own opinion about them. Mitch is an unfortunate young man that had too many bright ideas instead of concentrating on one only.

Carl has a lot to reveal about himself. He is surely not a pleasant character and will present a reason for it. Betty and Warren are very modest, shy human beings with one dream – getting Mitch to work on his own life and get a job. Lindsay is a colorful character, and probably the bravest one. She knows what to expect from Mitch but still agrees to help him to get some hard proof that Carl is not who he pretends to be. By helping Mitch, she realizes that this might be a big mistake. But her adventurous attitude takes over her mind and allows herself to play the game with fortune against a man she does not know what to expect.

In conclusion, “Room for Rent” is an amusing movie with a believable performance. Character development never disappoints. Humour is in a very big form. Furthermore, it’s funny, has good dialogues and never misses its tone. Surprisingly, it’s more engaging than you can imagine with two takeaways – do not take a lifetime opportunity for granted and never open the door to strangers in the middle of the night.