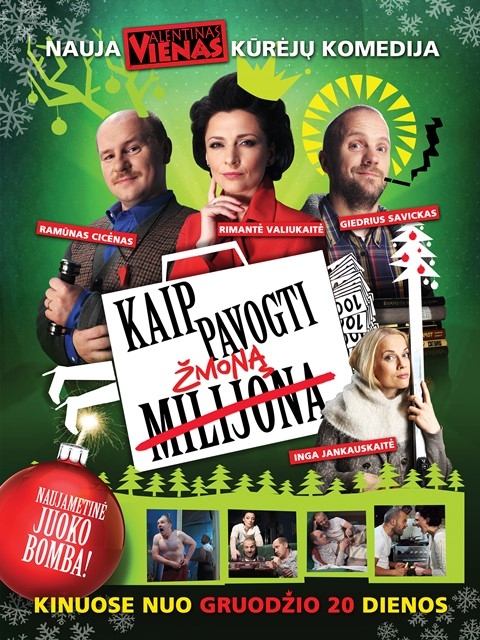 Vidas is an ex-banker who is sent to jail for six years, but serves only three. While he is serving his term, his wife, Laima marries Ramutis, a principal, and lives her life happily. But, everything changes with a blink of an eye, when Vidas is released from prison. The first place he goes is his old house, where his wife lives. Seeing his wife married again does not bother Vidas at all, and he demands to stay in the house, since he has nowhere else to go.  Now, being locked in one apartment, the trio has enough time to analyze their marriage, relationships, and of course, think of money and its real purpose. But will money buy happiness for those stuck in this house, or bring them unhappiness and disappointment. This is something that Donatas Ulvydas will answer in a charming way.

How To Steal A Wife opens with Laima, played by Rimante Valiukaite, watching the news on TV, where she hears that her ex-husband is being released from the prison. Laima`s current husband is not happy to hear this, and now fears for his own safety. Failing to recover from this recent news flash, the couple hears a knock on the door, and of course, Rumatis opens the door, and who he finds behind the door is someone he would not have expected. The funny situation in How To Steal A Wife begins when Vidas (Giedrius Sayickas) refuses to leave the house. And, this is understandable, since he has spent three years of his life in prison for a crime he did not commit.

Rumatis, who has never questioned his wife about anything, and feels no jealousy towards her, now starts to worry that VIdas might attempt to fight to get Laima back. Rumatis`s  fears could remain unfounded if only Laima had not started to act differently; wearing perfume and make up at home, and  she starts cooking Vidas`s favorite meals. Even though Rumatis manages to sort out the danger that may cause him to lose his wife, another unexpected guest arrives, who will turn everything upside down for him.

How To Steal A Wife manages to keep its audience’s attention throughout the film. Even though North American viewers may find some of the jokes strange, , it will seem quite normal and amusing for other parts of the world. The entire film occurs in one apartment, with only four heroes. The Director examines a huge topic in his film; a question we always ask ourselves; ‘will money be able to buy happiness’?  Some of us might come up our own answer, and the interpretation of the entire Ulvydas`s film, but one fact is undeniably certain, Ulvydas strongly believes that no matter what happens with Ramutis, VIdas, and Laima, and with the enormous sum of money that VIdas has hidden, happiness is something that will never be for sale.

How To Steal A Wife is one of those innocuous films that does not hurt anyone`s feelings and tries to make happy everyone.  It`s a great thing to see a film these days where everyone in the movie remains unharmed and happy as never before.