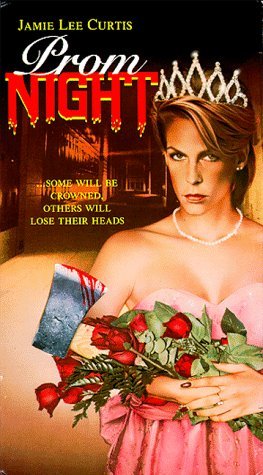 Four Hamilton High seniors, Kelly Lynch, Jude Cunningham, Wendy Richards and Nick McBride are hiding a terrible secret- the truth of what happened to ten-year-old Robin Hammond. What happened to Robin Hammond six years ago was a game that turned into a horrible tragedy, and someone saw what they did…. someone who has been waiting for six years for gruesome revenge.   Wearing a black hood and wielding an axe, a killer brutally slaughters the teenagers, one by one, at their high school prom, to ensure that every last person responsible for the death of a little girl will pay with their lives.

Prom Night begins with young Kelly, Jude, Wendy, Nick and Robin, playing quite an unusual game for kids, in an abandoned convent, where one is a victim, and the others are murderers.  For them it was just a game, the outcome they barely could have predicted when a little girl dies falling from a window, when her body lands on a car. The four kids, understanding what they have just done, swear that they will never tell anyone what happened in that building, where the tragedy occurred. But, these four have no idea that there was someone there who saw everything… And one day, he will come back to remind them about the fatal tragedy.

Six years later we see all the kids are grown up and getting ready for their prom night.  One of them is Kim (Jamie Lee Curtis), the sister of Robin, whose life ended so tragically; who is celebrating the anniversary of her sister`s death with her mother and father, Mr. Hammond (Leslie Nielsen) and Mrs. Hammond (Antoinette Bower). As the spotlight falls on the newly crowned prom king and queen, there is someone who is patiently watching, and waiting, for his turn to exact murderous revenge. While the avenger waits for his turn, we see how the teenagers and adults are getting ready for the big night; for the night that nobody will ever forget, because not everyone who appears at the party will leave it alive. Prom Night follows the best tradition of horror films where even an innocent person can become a victim, especially if that person appears somewhere in the wrong place at the wrong time.

Prom Night, directed by Paul Lynch, THE KEEPER, BULLIES, and written by William Gray, is one of those underrated pioneer horror films, starring Jamie Lee Curtis (HALLOWEEN film series, TRUE LIES, YOU AGAIN), and Leslie Nielsen (THE NAKED GUN series, AIRPLANE). Lynch`s Prom Night is quite chilling, entertaining, and absolutely not a boring film, which surely will be appreciated by horror film lovers and others as well. This film does aim to terrify the audience and makes them want to stop watching it somewhere in the middle due to way too many blood and violent scenes… But, you will still watch since it is smartly executed, with interesting lines, and solid performances by the entire cast, This refreshes our memory and reminds us, once again, why we love so much the films of the sweet 80s.

Prom Night has recently been released on DVD and BlU-RAY  in a beautiful new version; remastered and restored in 2K from the original 35 mm camera negative, with an all-new 5.1 surround mix. The quality of the film is quite solid, and can be easily watched on HD. It also contains some interesting extras: audio commentary with Director Paul Lynch and screenwriter William Gray, THE HORRORS OF HAMILTON HIGH: The Making of “Prom Night“ – Featurette, Collection of Additional Scenes Added for Television Broadcast, Never-Before-Seen Outtakes from “Prom Night” [Exclusive to Blu-ray], Motion Still Gallery [Exclusive to Blu-ray], Original Theatrical Trailer & Television Spots, English Subtitles for the Deaf and Hard of Hearing.  And certainly can be found  in the nearest DVD stores.