Johannes`s (Sasha Mylanus) time at home is one big struggle. His mother has recently passed away, his father is busy at work, and sometimes forgets to make food for his children, and his sister Nella Della (Kee Ketelaar) is busy studying and grocery shopping. Then, one day, the little boy opens a kitchen cupboard and his boring and uneventful life disappears in the blink of an eye; he finds a little man with magical powers, called Wiplala (Geza Weisz). Johannes`s happiness reaches new heights the moment Wiplala accidentally makes him and his family members small – four inches in height. But this is the least of his problems, because Wiplala does not know how to reverse his magic…

When it comes to making a film for kids, it is always hard to find a subject that kids and their parents will find equally interesting. This is probably why the Dutch filmmakers chose Wiplala, based on the book by Dutch children`s novelist, Annie M.G. Schmidt. The film begins with the little adventurer, Johannes, who unsuccessfully seeks attention from his father and sister. His family is very busy and ignores Johannes when he says that he might have seen something strange in the kitchen. 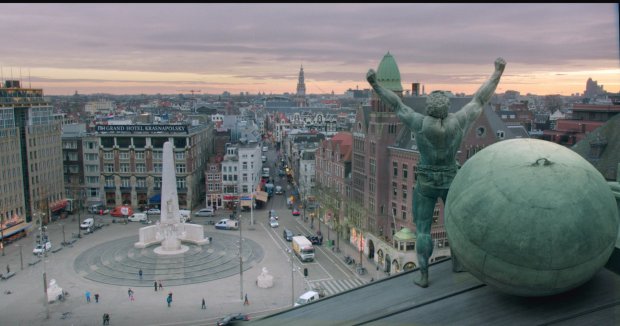 Despite the low budget for this film, The AMAZING WIPLALA manages to be a big family adventure film. When Johannes`s family becomes little in size, like leprechauns, they don`t lose hope that Wiplala can help them become normal size again. And, while small, they learn to see how sometimes big things are not that important, while attention, caring, and the ability to listen and help each other is what makes the small and unimportant values become larger than they could have ever anticipated.

Wiplala is a little man who is trapped in the land of Gulliver. He learns there not to trust people.  To protect himself he uses his powerful magic against those who dare to get close to him. Everything changes for Wiplala, when he meets Johannes and he learns that talking with ‘bigger’ creatures is not as dangerous as he thought, and he needs to be a bit more patient and open to new discoveries.

The Amazing Wiplala is a great family film; maybe not on the same scale as Disney, but still good enough to ensure that the journey this films will take the entire family on will be memorable, exciting, and unquestionably fun. And more importantly, by the time you finish watching this film, you will find yourself believing in yourself even more, because when believe in yourself anything will seem possible, and the impossible will seem that much easier.

Below you can find the screening info and the full schedule of the 18th Toronto Kids International Film Festival.