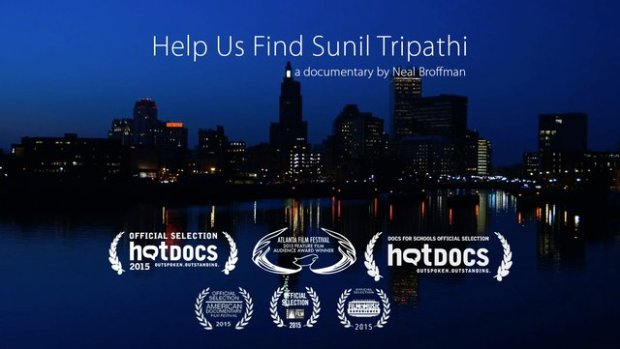 It is almost impossible to review Neal Broffman`s documentary film HELP US FIND SUNIL TRIPATHI without feeling emotional, frustrated, or feeling sad for the society  we are living in. Whatever you do, whatever you eat, or wherever you go is posted somewhere within a social network where people are acting like investigators wanting to know everything about anyone they wish.  But this is wrong. This is completely wrong and must be stopped. What happens after the disappearance of Sunil Tripathi is a great tragedy, and unfortunately, this tragedy is a symptom of our sick society and one that could have been easily prevented… HELP US FIND SUNIL TRIPATHI reveals the nature of the world and the people who we must deal with every day… Those, who hide behind a curtain, only to appear when they need to accuse someone of something… even if it`s wrong…

Sunil Tripathi leaves his Providence home and walks away in an unknown direction. His family reaches out to social media – Facebook and Twitter- asking people for help identifying the whereabouts of their gentle, kind, and simply harmless Sunil Tripathi, who apparently suffers from depression. Finally, the Tripathi family receives the attention they want, but it really is the opposite of what they want – Sunil, mostly known as Sunny to his friends, was identified by social network users as a second suspect in the Boston Marathon Bombings, and he was WRONGLY accused. This is unthinkable, but is no longer surprising when you see how people respond on Twitter, Facebook, and Reddit; where they thought they had every right to say nasty and ugly things about Sunil, who, all this time, was in the Providence River, waiting for his loved ones to find his body.

It seems Broffman could not stand by and objectively direct his film so that we could all feel the heartache of the Tripathi family in an incredibly touching way. He shows us the horrible aftermath of wrong accusations and people`s reaction on social media. It certainly opens our eyes and raises our awareness of everything pure and innocent we ever believed in. If only by the simple fact that the decision to make Sunil Tripathi a second suspect was done not by the Boston Police Department, or the FBI, but by a Social Network. Sunil`s family, his mother, sister, and best friend not only share their memories of Sunil, but give the audience a chance to know this wonderful human being, to feel sorrow for his pain and the troubles in his mind that he had to deal with.

HELP US FIND SUNIL TRIPATHI is a terrific documentary film in the way it was made. It perfectly connects all the dots making this film an entry on the short list of documentary films that must be seen by everyone who still believe that there is something good out there. It shows us that if someone needs help, we all must rush to help and not accuse them of something that we will regret later. It also shows that the influence of the social network is tremendous and dangerous, and unfortunately, cannot be controlled.  But maybe, after seeing this film, we will learn something good from this, and despite the tragedy and its outcome, we may become better people simply being respectful to those whom we have never met.