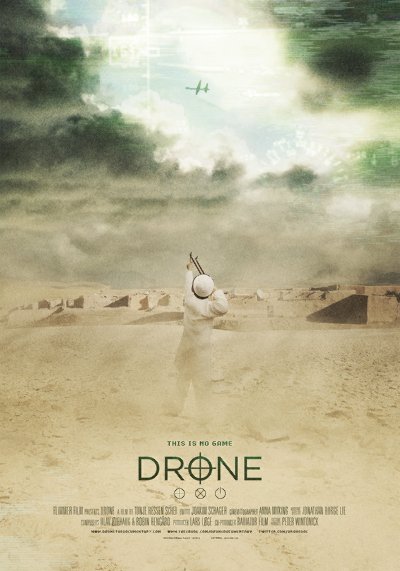 Some people are simply unfortunate to be born in a part of the World where a Drone operator would receive an order to bomb an area where only civilians live. A family celebrates the marriage of their relative and gathers together at the wedding. All of a sudden, the area, where a second ago there was a big celebration, becomes a huge cemetery of civilians, who lose their lives for nothing. The story told in Drone, written and directed by Tonje Hessen Schei, reveals many unknown details about a department in the CIA that is authorized to eliminate any target that may threaten the United States. But can a civilian somewhere in Pakistan harm one of the most powerful countries in the World?

What happens in Drone was partially told in season four of Homeland, where Quinn and Carrie Mathison were trying to catch Haissam Haqqani, who was able to escape a Drone attack during a wedding.  What happens in real life is much more devastating and cruel.  Brandon Bryant is one of the Drone operators, who is brave enough to sit in front of the camera and share with the audience how the CIA was authorized to do whatever they wanted in order to prevent an attack on the States, including bombing civilians based on unconfirmed information reported by undercover agents.

How important is it to have a device that will make Pakistani children hate the blue sky? Unfortunately, it`s not easy to watch Tonje Hessen Schei’s documentary film due to the disturbing graphic scenes. There are not many, but there are enough to realize that there was no proof that the people who were killed were militants or dangerous enough to be killed in such a horrible way. In this documentary, it is also revealed how the government recruits a Drone operator, which is quite shocking.

The Drone is an eye opening film which allows the viewer to look at the War from a different perspective, where only power was used in order to achieve their gals.  It`s a pretty important story that some of us must see and learn from, because nobody is going to show us the truth except documentaries like Drone. It will change your opinion on many things, and in the end, will leave you certain of one thing – War is the most dangerous thing ever created by human beings, with countless victims who will never be able to celebrate the victory over injustice, simply because there is no justice in a war.