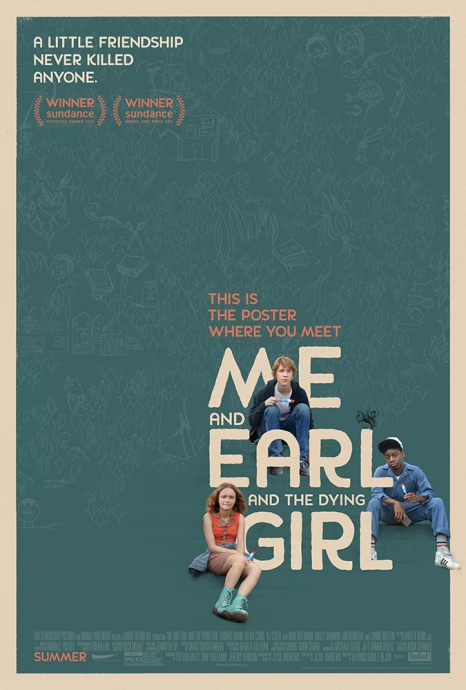 Who says friendship between a girl and a boy can hurt? Who says there is no difference you can bring in one`s life if that person has been diagnosed with last stage of leukemia? Who says you can`t make someone happy just because that person has nothing much to expect from his life? The film ME AND EARL AND THE DYING GIRL, directed by Alfonso Gomez-Rejon, will answer your questions as clear as possible, to assure that you don`t misunderstand it. But first, you must get ready for this journey where you cry and laugh at the same time because of the simplicity, beauty, and perfectly crafted film that will make you talk about it after you watch it.

Greg is a teenage boy who does not want to compromise his privacy, unless it is his best childhood friend, Earl. Both friends love making short, but incredibly funny films based on vintage films. One fine day Greg finds out from his mother about his classmate Rachel, who has been diagnosed with leukemia. His mother makes him go and talk to Rachel, to comfort her and show her his support, even though there is probably not much he can do. Skeptically though, Greg agrees to do so, only realize that this was the only missing piece in his life, an emotionally connected friendship, with a curing effect.

Alfonso Gomez-Rejon`s film is an absolutely enchanting film based on Jesse Andrews’ novel. Since the screenplay has been written by Andrews himself, the film does not lose its heartbeat, allowing the viewer to sense entire story first hand. When we first find Greg, he seems like a very private person, while Rachel may not be as private but seems too far from the real world, where she has to deal with her current unfortunate situation. Two seemingly different people find something in common which allows them to further their acquaintance and grow into something magical that transforms into real friendship.

ME AND EARL AND THE DYING GIRL brings up an interesting concept which can be interpreted in various way. I would like to offer my own interpretation here. Despite the powerfulness of cancer and its ability to kill a human being in general, this disease still can`t kill something important that connects people with each other, love, respect, and of course, friendship. This will always make a difference no matter how impossible the situation that person is in might seem.

There are three persons who must feel proud of making a huge and incomparable contribution to this film, its young cast, Thomas Mann as Me, RJ Cyler as Earl, and Olivia Cooke as The Dying Girl. The trio together, or even individually, take a serious step forward, especially in some very emotional scenes. Especially the one where the camera stays still while we watch an emotionally charged conversation between Rachel and Mann. It was absolutely superb.

In conclusion, ME AND EARL AND THE DYING GIRL is one of those rare teenage films where we don`t see any unnecessary scenes or dialogues that could have moved us away from its main direction. It’s cleverly directed, well-acted, convincing and a charming film about one thing we all must remember: friendship is one of the most important gifts human beings have. It may break your heart, but will never kill. It may disappoint you, but mostly will make you happy, because there is always someone like Greg who, does not matter how private a person he is, will always be there to make your life different, even when you see no hope.