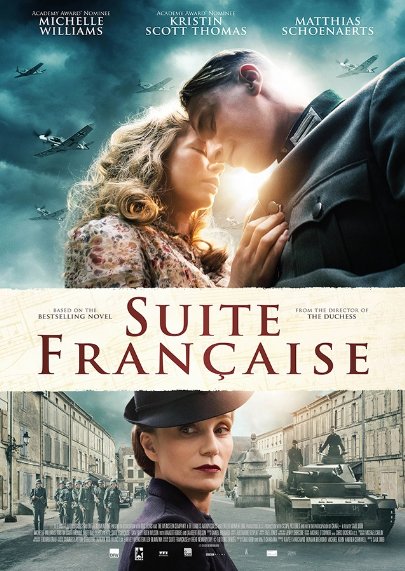 Every time I watch a film about war, especially World War II, I always find myself thinking, “how many more wars do we need to witness in order to understand that warring is the most useless and cruel thing ever invented by human being? Suite Française is based on Irène Némirovsky ‘s best-selling novel, who lost her life at the age of 39 simply for being Jewish. But this movie is not about Irene, but about her masterpiece, Suite Française.

Paris in 1940’s is attacked by German soldiers, except one house where peace is still in order, The Angellier house. While the hatred of Germans is growing among the French people and its soldiers, love and passion at the same time grows in the heart of a young French lady, Lucille Angellier (Michelle Williams) and a German Lieutenant Bruno von Falk. Meeting in such a difficult time seems to cause no problem for young people, except Lucille’s mother-in-law Madame Angellier (Kristin Scott Thomas), whose attitude and overprotectiveness can scare even a mighty German soldier.

Suite Francaise, directed by Saul Dibb (Dutch) begins with Lucille and Madame Angellier, who are on their way to collect money from their tenants. On their way to the next house, they find themselves under Nazi bombing, which suddenly destroys their regular life. Dibb does not take much time to develop the story to recreate the war environment. And because of impressive photography, the viewer is allowed to feel the harshness of the war. We first meet Lieutenant Bruno von Falk when he knocks at the door of Madame Angellier’s house, where he’s sent to live and serve his duty as an officer. He is friendly, has a charming look and his delicate approach makes Lucille to see in him not just an enemy, but as a man, who seems unlike many other officers, kind and respectful.

Dibb spends an hour or so to develop the relationship between Lucille and Bruno. But even that long anticipation does not erase the fact that the film itself is beautiful enough for having a little sparkle in the air, while the war does its job – taking people’s lives. If it happens that you haven’t seen FAR FROM THE MADDING CROWD with Carey Mulligan and Matthias Schoenaerts, you better wait till you watch Suite Française. Despite the weak chemistry between Matthias Schoenaerts and Michelle Williams, in comparison with what Mulligan and Schoenaerts shared, it looks stunning and interesting throughout the film. It keeps the intensity of situation and the plot as alive as possible, allowing the actors to breathe life into the characters they portray.

Kristin Skott Thomas and Ruth Wilson look simply great in period drama, where their characters’ lives broken by a war is so visible. In conclusion, Suite Française is charming, heartfelt film about war and love that once again rises above sand and blood. The performance delivered by the entire cast is sensually decisive. A beautiful soundtrack, named Suite Française is so touching that in the end will make the viewer cry. In the end, this film is not about happy ending, or about war, or relationships; it’s about not losing yourself when you’re caught up in the middle, with bombs and the whistle of bullets everywhere. And you, as a participant, must choose whether you are with it or against it?