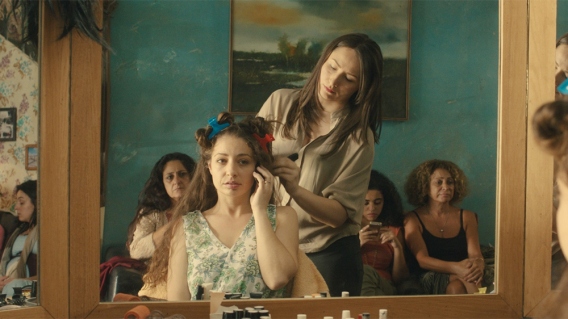 When I asked her what she was doing, she said that she was cleaning. I asked if she was joking or was she serious. “There’s people who are dying, who are killing and you are cleaning?” She told me, “What can I do? I cannot stay waiting for a rocket to kill me. If somebody comes to collect my body, they’ll say she was a cleaning before she dies, she was a good woman.” – Arab Nasser

There is a part of the world where even going to a beauty salon is dangerous. And that danger can come not only from machine guns but from sharp-tongued women as well. And when you reach to the point where you’re surrounded by non-stop gun shots in the street, you somehow manage to continue cutting hair, fixing eyebrows and gossiping, until the moment you realize that your life may end before the war outside. This is what makes Dégradé a must see film for anyone who wants to face a life of those who`re not as lucky as we are. Doing an interview with director Arab Nasser was an absolutely delightful experience where I learned more than I could even imagine.

MOVIEMOVESME: You and your brother are obviously males but the way you captured the female character is simply amazing. Where did this idea come from?

Arab Nasser: Since we started making movies, we’ve wanted to look for some other subject to talk about life. If you see our movies which we’ve made, you’ll see all of them talk about life, without occupation, the life in Gaza. The idea of Dégradé came from the same – life. But we chose to talk about life through a woman’s perspective in this place. Christine, she’s come from outside, the owner of a salon, there’s religion, there’s the woman whose difficult like makes her to take drugs, and all different kinds of women.

MOVIEMOVESME: Do you think because life is difficult it makes people do drugs and/or drink?

Arab Nasser: In the last ten years, in Gaza, the people have started taking some drugs because they think that this will make them forget the shitty life in this place. This character takes drugs because she has something horrible in her life. Her husband beats her so she takes drugs to forget the really hard life she lives.

MOVIEMOVESME: The reason for shooting is because of a lion being stolen from the zoo. Why the lion and why the zoo?

Arab Nasser: This actually happened in Gaza in 2005. There are families that are not exactly mafia but similar. They are drug dealers like any other place in the world. There is a head of a family who once goes to the zoo in Egypt. He thinks that he can bring a lion in the Gaza zoo with some chicken, rabbits. He suddenly opens the cage of the lion, takes it out, nobody stops him and he comes back with the lion in his area. He puts the lion in the street like a mafia. The women are stuck in the salon because of the propaganda of the lion. The subject is not the lion or what happened, the movie as a whole can be considered as a metaphor. In every society there is a good and there is a bad and when we talk about Gaza there is misunderstanding of religion, traditions, and problems with society. The idea is to tell what goes on in the mind when you’re stuck in a place like a salon. People in Gaza after the 2014 war are searching how to rebuild their life again.

MOVIESMOVEME: What was the idea behind women continuing to get their hair done, put on make-up even when there’s shooting going on outside?

Arab Nasser: We want to show that resistance is no just by weapon when we understand the meaning of resistance. To stay alive is resistance, to nurture your body is resistance. We talk about the people in Gaza. I was in Jordan when we started preparing this movie and I was trying to call my family in Gaza. I tried for several days. Finally after one week I got hold of my mother and we talked. What I saw on television that was happening there was horrible. It’s like massacre. When I asked her what she was doing, she said that she was cleaning. I asked if she was joking or was she serious. “There’s people who are dying, who are killing and you are cleaning?” She told me, “What can I do? I cannot stay waiting for a rocket to kill me. If somebody comes to collect my body, they’ll say she was a cleaning before she dies, she was a good woman.” When I listened to this I cried. Later I discovered the meaning of life. The actions of the women in the salon signify hope that maybe they’ll be able to return back home. Let’s face life!