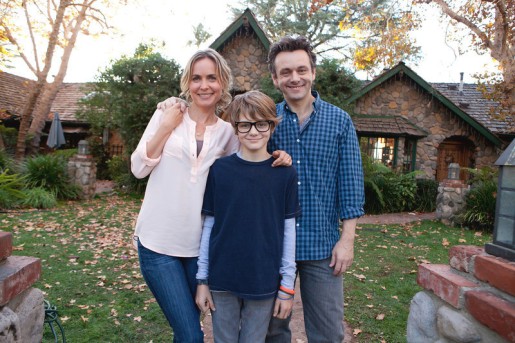 Directing short films is much more difficult than a full length one. Especially, when the running time of that film is seven minutes. This is why watching Barbados directed by Micha Manson-Smith is more fun than you can imagine. Manson-Smith`s film received its World Premiere at the Toronto International Film Festival, and it follows  David (Michael Sheen) is a middle class guy with middle class problems, despite his lovely home and beautiful wife (Radha Mitchell). His son Gary (Ty Simpkins) is the same, just thirty years younger. Both are looking for a way out from suburbia and all it’s trappings. One Sunday during lunch however, when the police come knocking… David’s world suddenly becomes even more claustrophobic.

During the Toronto International Film Festival, I had a great pleasure to meet and talk to Misha Manson-Smith about Barbados.

MOVIEMOVESME: How did you come up with such a brilliant idea of making a movie about Barbados?

Misha Manson-Smith: (Laughs) The idea came from a writer, George, who I’ve worked with quite a few times. He actually wrote the script some time ago. It was a piece he wanted to direct himself because he wanted to move into directing. He’s quite a prolific drama writer, he’s written several features, drama series’ in the UK like The Hour, The tunnel etc. Anyway, he sent it to me just to see what I thought. Obviously I loved it, this was two or three years ago, so I always had it at the back of my mind. I hoped he’d make it someday. I then found myself, in a meeting with Funny or Die, probably a couple of years ago, they wanted to make more features. They had a slate of finance, so at that time they said it was a consolation prize if I wanted to make something short then they’d love to get involved. I said I actually had one script repeating in my head, so I asked George if I could please direct it and he agreed to let me. So all the credit for the idea goes entirely to George Kay. This is his baby, but it was a lot of fun to bring it to screen.

MOVIEMOVESME: What was the process to bring out the story and make it in 7 minutes?

Misha Manson-Smith: The process of this was fairly smooth once Funny or Die decided to jump on board and make it happen. They have very good talent relationships and so somebody like Michael Sheen, who I previously tried working with a couple of times in the UK. So when this came up they were working with him and so the combination of the history with him and the script appealed to him. He said yes straightaway and then the other cast came on board once he was there. Originally, the shot was set in the UK, but for various practical reasons we ended up shooting at Sherman Oaks. We shot it in one day and once we had the great script, some great talent on screen, then we sort of ended in a high with the other departments. The DoP, who has shot amazing movies like Single Man, the Tom Ford movie, so it was a great opportunity to work with him. So basically Michael Sheen flew in for the day from London, the DoP flew in for the day from Poland, so we all just arrived for one day of filming at Sherman Oaks, did it and the next day flew out again!

MOVIEMOVESME: Can you talk about the kitchen scene where Michael starts telling a story about a girl to his son Gary?

Misha Manson-Smith: The first thing to say is that what the guy realizes that it was all sort of in his imagination. So I actually don’t think he was a rapist. Basically he is just suffering from some sort of middle class guilt. You know people who feel awkward about having cleaners, how embarrassed they feel when they see themselves having a servant. This is sort of some extreme extrapolation of that kind of middle class acts about your place in society and abusing it. That scene it always felt like an incredibly great, inherently funny relation. I think lot of the best comedy and comedy scenes are kinda built around the idea rather than jokes particularly. So it’s funny because it’s tense and people don’t know initially whether to laugh or not. You’re half way into the film before it reveals itself to be comedy. It is sort of something in the dramatic space not many people write. George’s writing is quite naturalistic, feels quite real, could be a drama but it happens to be funny. So when somebody comes up with a great script in the area, you just want to grab it.

MOVIEMOVESME: What, in your opinion, is the difference between a short film and a full length film?

Misha Manson-Smith: It’s kind of the same really. You’re still having to develop the script, finding all the Head of Departments who would be passionate to be a part of the film, casting it, the financial aspect. But generally, you can be very ambitious of who you want to get because you’re only asking for one day of somebody’s time. People are gonna be like, “Okay, I’m not gonna get paid much in a day but let’s take a chance, it could be exciting.” The critical thing is the writing, that’s what everyone latched on to. But people jumped into it lot easier than it would have been if it were a movie that’d take months of their lives. So in some ways it’s easier.