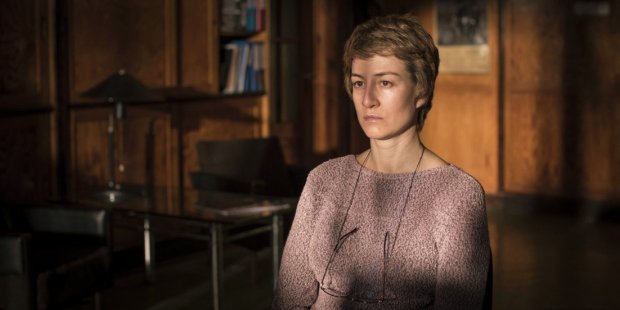 Can the therapy of connecting with our dead relatives help us beat depression, sadness and cure our soul? Certainly, the answer to this question won’t be that easy, and there is no expectation to receive one from anyone. However, what’s been offered by polish filmmaker, Malgorzata Szumowska in BODY is unbelievable, and hard to comprehend, but it works so well that sometimes you really wish it could be true. But what we know about death, departure of people, or their intention is what you must look forward to see in this film.

Body is one of those films that’s hard to review as the subject matter it offers is so deep that in order to understand it fully you need to live this life for over one hundred years. The film begins with the Prosecutor (Janusz Gajos), who arrives at a forest to examine a crime scene where a man hanged himself. Meanwhile, we are taken to the same man’s house where his anorexic daughter, Olga (Justyna Suwala) wishes one thing, her father never appears in the house. And that happens because of her mother, who passes away.

While the chaos occurs in the prosecutor’s house, he finds himself in Warsaw’s Gdanska rail station, where the corpse of an infant is found in the toilet. Tired and exhausted, he comes back home just to find his daughter once again attempts to commit suicide. This is when Olga meets Anna (Maja Ostaszewska) who has her own, unique way treating people from depression and inability to cope with the loss of their loved ones. Anna is medium who has an ability to talk to dead people, but only when they find it important to appear. Basically, Anna becomes a messenger between Prosecutor and his troubled and suicidal daughter who are trying to reconnect with each other with the help of their deceased beloved family member.

Will the dead person be able to bring peace to the life of one who he left behind is something you must find out after watching Szumowska’s brilliantly directed film. But one thing I may assure you, this film will touch you, bring you a specific feeling you might find hard to explain. But in the end, the profound and compelling story, and impeccable execution is all what you will celebrate at the end of the film. And that is all what matters when it comes to enjoying filmmaking at its best.